Kotgarh: Focusing on improving quality and quantity of apple producing methodologies, Confederation of Indian Industry(CII) organized a days’s workshop here at Thanedhar, Kotgarh that was attended by scientists and fruit growers. 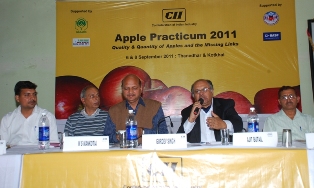 He said that whereas late Satyanand Stokes pioneered in introducing commercial growing of apple as a cash crop from Kotgarh but it was time to revisit the subject as climate change and global warming has had an impact in the fruit producing belts of the state.

Plant scientist GP Upadhaya spoke about the need to keeping a check on the soil health as “we feed the soil, so the soil will feed the plant.” Constant monitoring of soil health was drawing desired results, he added.

TP Dutta, a former director with Indian Institute of Packaging Management made a presentation about packaging methods that has lately been introduced in the horticulture sector. 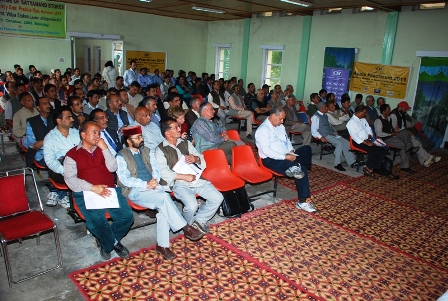 Many leading apple growers, which included Vijay Stokes, a grandson of Satyanand Stokes, participated in the workshop.

Vijay Stokes, after retiring from teaching engineering at IIT and in the US, is already experimenting with rejuvenating old orchards by re-planting them with high yielding stock trees on a large scale.

The industrial chamber is scheduled to hold another workshop at Kothkai, another important apple growing centre on September 8.