Cleaning Mountain is her aim,

Collecting Garbage on her trail,

Segregating Garbage in the bags,

During summers, working day and night with release of our critical project I could now afford leisure days, or I could dare to ask my boss to approve my leaves. And the best reward I could give myself was challenging my adrenaline level by an annual adventure trip of social responsibility, by volunteering for the Green organization called Mountain Cleaner. 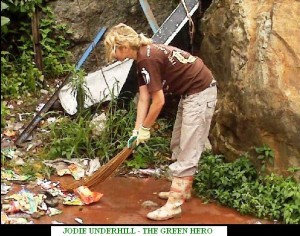 Intrigued in thought about my journey from Chandigarh to Dharmasala, I crossed the Rock Garden, and thought about the spirit Rock Garden man Nek Chand- a living example who created a unique garden housing sculptures made by urban waste. Rarely do we come up with innovative and creative people who get inspired by Waste and Garbage!! â€˜Someone with the same spirit is Jodie Underhill, a Briton who came India to sponsor two Tibetan children, and ended up collecting garbage after seeing the piles of garbage making Dharmasala uglier day by day. Where most of the people smudge nose, curse government for lack of initiative, ignore garbage, spread litter, she took the initiative of cleaning the holy land of the Dalai, and made a difference by showing her way of traveling and trekking. Her cleaning initiative turned out to be a balm for the still raw wounds of pre independence British cruelties left on Indians – , which is the need of the hour, not only for enhancing tourism but for sustaining a Greener Earth. She is role model to all Indian who follow the tradition of not letting even slippers inside home to be overprotective about cleanliness inside their homes and don’t feel ashamed of letting throwing garbage just out of the boundary walls of their home.

She started her cleaning campaign as one-woman army, gradually, like her smile campaigns became contagious in her vicinity. Locals, Tibetans, travelers, trekkers, tourists from around the globe visiting Himachal have started understanding the need of cleaner surroundings – by coming forward, and giving cleaning initiative, a shape of mass movement, led by Jodie. On Mondays and Saturdays, volunteers asking for German Bakery are a common sight at Bhagsu, the days when weekly cleaning trails are organized. Three years old, Mountain Cleaners organization is growing leaps and bounds by leaving it’s cleaner and greener impact on school grounds of Dharmasala, Children’s park, Triund, Guna Temple, Bhagsu Waterfall, Mani Mahesh and various attractions where tourists leave garbage.. Now, greener and cleaner mountains, which are a mood rejoicer to every visitor at Dharmasala and Chamba, are the result of hard efforts of people involved in Mountain Cleaners.

Jodie lives in a Himachali traditional Pagoda styled house, with artifacts hanging on walls of her home which are made from waste by school kids. A corner of her room’s self is stacked with books, mostly on India. Having worked for a few NGOs for last few years, I have found professionalism missing in various Indian NGOs; Mountain Cleaners are a definite exception. The best attribute Jodie has, is her ability to keep a low profile about herself and give all the credit to the volunteers, which shows her genuineness for working towards Sustainability Cause. Presently, juggling between Indian and UK, she is on an effort to bring everyone from the globe at one platform to Sustain the Environment.

Running a voluntary organization is not a piece of cake and that too in an developed country which is more like an alien country for any person form Developed Nation. Unfazed by all daily bottle necks blocking her way like rainy stormy days, heavy thunder storms, hail storms, snowing heavily, no electricity, no telephone and slow or no internet she marches on in her crusade against pollution. Financial crunch, turning up of less or more than expected volunteers, all add excitement for the Community Cleaning project. She has many feathers in her hat to boast about; brightest of them is Green Hero award. She considers public appreciation and love from the masses more valuable than awards, and considers them as driving force to take the cleaning mass movement all over India, step by step.

Her cleaning campaign is now reaching out to various levels of society, involving educating school children, involving younger or any age groups people for cleaning trails and approaching various organizations for funding the trails. Weekly music concerts, Children programmes, painting walls and celebrities involvement are too a part of the Mountain Cleaners activity. She keeps attending environmental workshops for educating herself. Volunteering for Mountain Cleaners gave me a contented feeling for working as united for curbing Global Warming with people around the world as one goal. Hiking with cleaning campaign was next level of Adventure Spirit and off course next level of challenge to check response of my Adrenalin level.

After finishing the cleaning trail, while biding audios to Jodie I felt as if she was saying â€¦..Well Lady, choice is yours!!……. Whether you want to travel the world appreciating its greener pastures, or want the WORLD TO SEE CLEANER GREENER ……. ………….INCREDIBLE INDIA!!!