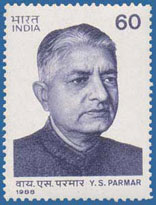 Shimla: Chief minister Prem Kumar Dhumal, speaker Tulsi Ram, leader of the opposition Vidya Stokes and several other leaders paid floral tributes to late Dr YS Parmar, to commemorate the 105th birthday of the stateâ€™s first chief minister, credited with having laid the foundation of setting up the hill state.

Later presiding over a function at the Vidhan Sabha library complex, the chief minister said that the state would remain to Dr Parmar for times to come as it was under his leadership that Himachal Pradesh got a separate identity amongst hill states.

He said that late Dr. Parmar had been a multifaceted personality who had deep understanding of social system, politics and literature and had left an indelible mark in the hearts of people.

Speaking on the occasion Tulsi Ram said Dr. Parmar had the vision to take land mark decisions and land reforms and education were two major sectors where he had contributed significantly