Shimla: For diversifying tourism from crowded destinations like Shimla and Manali, the state government on Friday launched a rural initiative under â€˜Har Gaon Ki Kahaniâ€™ by seeking to link folklore of lesser known destinations with popular circuits.

Speaking at the launch, chief minister Prem Kumar Dhumal said that starting out by picking 12 villages, one in each district of the state; the government intends to expand the project to 102 villages by next year for which Rs 13 crore would be spent. 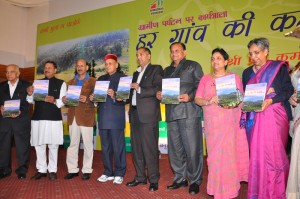 The funds would be used for improving rural infrastructure and putting in place civic amenities for boosting rural tourism, he said.

He added that â€˜Home Stayâ€™, a pre-cursor to the present scheme for promoting rural tourism was launched in 2008 and till date already 353 units had been registered in the state.

On the occasion the chief minister also launched a booklet â€˜Har Gaon Ki Kahaniâ€™, a collection of the lesser known stories about the 12 villages, picked up for start of project.

The objective is to acquaint the visitors with the life style, customs, traditions and local cuisines woven around village story and creating employment avenues for the rural people, said Dhumal.

He said that there were 17,495 villages in the state under 3423 panchayats and the rural tourism initiative was an effort to disperse the activity into lesser know destinations and increase the share tourism in the state GDP by increasing the stay period of tourists from 1 to 3 days.