They say,the condition of the roads reflects the overall performance of a government.And if you see the plight of the roads in Himachal Pradesh you at once know the government has failed to perform.

The government is guilty of utterly neglecting the state roads and letting down the people of the state and the tourists who visit the state from across the globe. 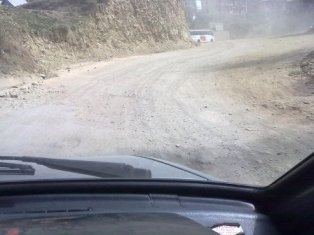 Talking to a cross section of people across the state and travelling on some of these miserable roads over the past couple of years you feel the state government doesnâ€™t exist, so appalling is the condition of some of the roads.

The village roads, the state highways and even the national highways are in utter neglect and disrepair.

Many describe the NH-22, also called the Hindustan Tibet road the worst major road in the state.The 50 km stretch from Kufri to Narkanda is a disaster zone.

Forget about the once lovely winding high altitude road running through Himalayan pine trees and the clean crisp air on your face in the popular tourist resort of Kufri.

Now the road at Kufri has turned into a nightmare, full of deep ruts, and always there is dust emanating and enveloping Kufri as if one were driving through a desert town.But through the dust you can glimpse exotic yaks,a reminder that it is Kufri, so bad is the road here.

The road continues further like this,full of deep potholes many even a foot deep.A lapse in concentration means a rude bump for the driver,maybe even a breakdown.

The bumpy road shakes and rattles your car,your body and even your brains.To console yourself you may imagine being a dirt road driver of a Himalayan car rally in the remote Lahaul valley,except youâ€™re not driving a racing car but an ordinary car and the challenges ahead can scare you,so bad is the Hindustan Tibet road !

By the time you pass Theog which in covered in layers of dust,looking so ordinary and decrepit.Narkanda is still 30 km away and the punishing drive continues without relief.Even the spectacular scenery of the mountains offers little relief and succour.

Anxious and gloomy you worry a possible breakdown,worse even a head-on or down the hill crash so disheartening is the drive.The only relief is the thought of a warm meal or steaming hot coffee at Narkanda after the punishing journey.

You try to remind yourself that as a tax payer the government is supposed to look after this road,even though the road ahead hardly looks like a road.

You donâ€™t know how to react when you hear the stateâ€™s PWD minister Gulab Singh talk like a clown,â€œDonâ€™t worry, once the skies clear up all the roads of Himachal will be spick and spanâ€, he has been often saying for so long, but the roads only seem to get worse.

If youâ€™ve travelled on this road you should have no problem saying that the Kufri-Narkanda national highway is the worst road in Himachal and a shame on the Dhumal government which is always strangely boasting and claiming to be the number one state of India in many fields !