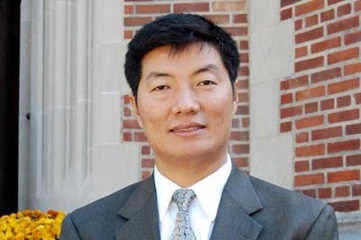 Lobsang Sangay, a Harvard educated scholar, defeated his two rivals for being elected to head the Tibetan Government in Exile.

Election commissioner of Tibetan Government in Exile, Jamphel Choesang announced the results of the election today at Dharamshala, declaring that Sangay had won by securing 55 % of the votes polled.

Tenzin Tethong, a former representative of the Dalai Lama in New York and Washington secured 37.4 % votes and Tashi Wangdi, the other aspirant got just 6.4 % votes. About 50,00 Tibetan voters took part in the election.

With His Holiness The Dalai Lama firm on taking a backstage from leading the Tibetan movement that aspires for a settlement to the decades old struggle for a honourable return to homeland Tibet, the 43 year old Sangay has a difficult task cut out before him as he tries to fill the gap.

Sangay election marks a break from the past as the elected Prime Minister was born outside Tibet and has never been to Tibet either. Being born in North East India, he went onto specialize in international law at Harvard.