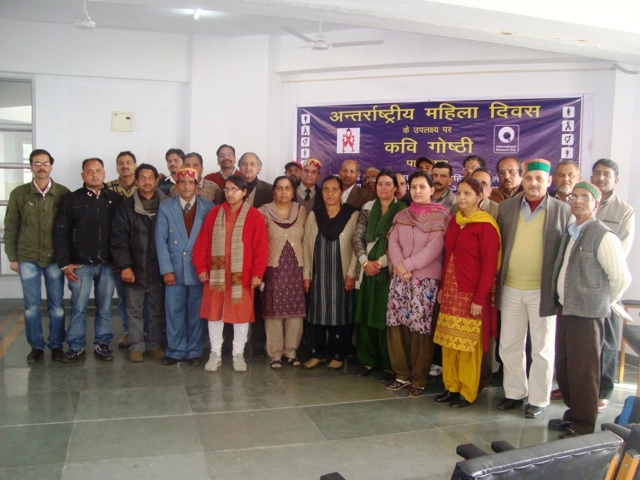 The event was presided over by poetess Mrs Saroj Parmar. She sent a message across the male dominated society that women should be treated with dignity as equal partners. Bimla Vishvapremi, social activist and role model in gender equity, who has closed family after single girl child was guest of honour on the occasion; stated that women should decide if and when to have children, and exercise their choice and decision making in matters related to protecting their health including HIV/ Sexually Transmitted Infections (STI), as it their right. Organizing secretary of the event Dr Sushil Phull, told that over 60 participants expressed solidarity for the cause of women empowerment and pledged to spread the message of AIDS awareness in their respective forums.

Dr RK Sood District AIDS Programme Officer, Kangra saluted all women on the 100th anniversary of the International Womenâ€™s day & stated that â€œwomen are vulnerable to STI and HIV due to lack of access to correct information, an environment which makes discussing issues around sexuality taboo adds to their vulnerabilityâ€. Deliberating on the services for HIV prevention and support under the National AIDS Programme, he told that anybody can get free and confidential HIV test at ICTC. He also stated that children of HIV positive are given financial assistance of Rs. 300 to Rs. 800 per month with support from NRHM; and amount of Rs. 18 lakhs is being disbursed to 321 beneficiaries in the district directly through bank accounts, through Integated Counseling and Testing Centre (ICTC) staff. ICTCs are located in the District at Palampur, Paprola, Dehra, Jwalamukhi, Kangra, Nurpur, Dharamshala Hsopitals.

56 Red ribbon clubs have been constituted in colleges, universities and ITIs in the District to increase awareness about HIV/AIDS among youth. In addition, anybody can dial toll free helpline no 1299 for information. All sections of society like panchayats, self-help groups, anganwari workers, religious leaders, transport, tourism are actively involved in the campaign for transformation of mindset. He added that stigma and discrimination is a barrier to access to services, and we should accept the people living with HIV AIDS as the disease is not spread by causal contact. 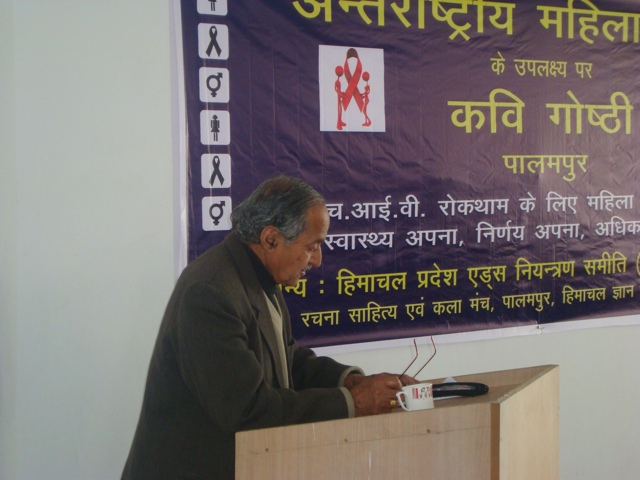 Gautam Vyathit, folk literature expert, implored on all to talk openly rather than suggestively, as the audience does not understand words the hidden between the lines, He added that fear is past, and the new message is hope. The participants called for womenâ€™s empowerment, and increased role in decision making to end female feticide and fight the HIV/AIDS. Poets called for increased tolerance towards PLHIV especially among doctors. Some poets implored on all to act with restraint and imbibe to faithfulness and values for a healthy life. Other prominent poets included Dr Piyush Guleri, Dr Rajiv Kumar Trigarti, Suman Shekhar, Urmil Kapoor, Trilok Mehra, Suresh Bahrdwaj, Hari Krishna Murari, Om Prakash Prabhakar, Vijay Kumar Puri, Harmesh Bali, Dr Naresh Mahajan, Joginder Rana.

30 years into the AIDS epidemic, women and girls are still the most affectedâ€”nearly 16 million are living with HIV and the number continues to rise every day. We must not accept thisâ€. Dr Sood expressed hope for a world where; all women can protect themselves and their children from HIV; all women have access to HIV treatment; and women and girls do not fear violence & HIV infection, and visioned a dream for a world where there are Zero new HIV infections, Zero discrimination and Zero AIDS-related deaths among women and girls. He called upon all to make this a reality, not in the next 100 years, but now.