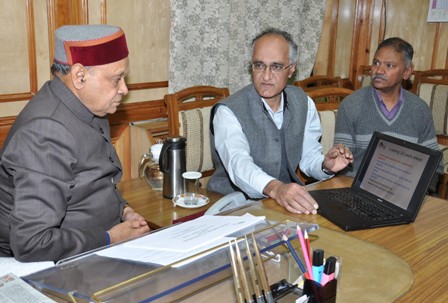 Shimla: Spelling out the vision for IIT Mandi, chief minister Prem Kumar Dhumal let the top administration of the new institute know on Friday that besides development of green energy technologies (solar, hydro, geothermal and bio-mass), over the next five years focus should be on integrated mountain development, construction of roads and railways, disaster management, agricultural and food processing technologies.

The chief minister let director IIT Mandi, Timothy A Gonsalves and special duty, administration S Samuel know that it was a dream project to realise the objective of making Himachal Pradesh a hub of world class vocational education.

In times to come IIT Mandi along with NIFT Kangra, ESI Medical College Mandi and Central University Kangra would play a pivotal role in realizing our dream, he said.

The state had been prompt in identifying suitable land at Kamand near Mandi, which satisfied the visiting central team and a fully equipped IIT campus was coming up speedily.

IIT Classes had already been started at Government Degree College Mandi and additional accommodation had also been provided, he added.
To improve accessibility, the state was pursuing with the central government for upgrading of Bhuntar airport and equipping it with night landing facilities, said Dhumal.