After inaugurating the scheme, speaking at a public function at Dabat village, the chief minister said that the government had given high priority to agriculture and was intent upon improving productivity increasing the area under irrigation. 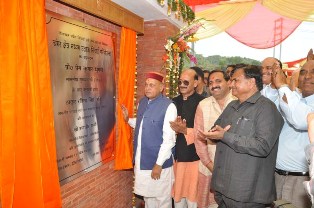 Thanking Punjab chief minister Prakash Singh Badal for timely implementation of the agreement between the two governments for setting up the Changer Mid Lift Irrigation Scheme, Dhumal said that with water made available for 2350 hectares of land in 28 villages, it would check migration from the otherwise water deficient area.

Besides the irrigation scheme, he said that to conserve run-off water, 62 soil dams involving a cost of Rs 1.62 crore had been constructed in Changar area.

Irrigation and public health (IPH) minister Ravinder Ravi, who among others spoke at the function said that the IPH department was spending Rs 1600 crore in the current financial year on different schemes.

Water drawn out of Anadpur Sahib hydel channel has been lifted by Changer lift irrigation scheme and distributed through 6 rising main pipelines. The scheme is expected to double cropping in an otherwise arid region of Naina Devi tehsil in Bilaspur district.

The project was envisaged in 1999 by the Dhumal government in its previous term. With the region only getting 9.37 cms of annual rainfall, the irrigation facility projects to double cropping in the irrigated areas.