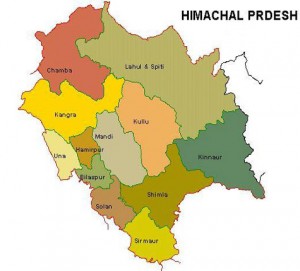 Shimla: While the year ends with ruling BJP and opposition congress out swaying urban voters for the upcoming local bodies election, the run through 2010 has been a mixed bag with no major upheavals to rock the boat of entrenched powers.

The year opened with the government battling swine flu cases that had caused much panic but effective intervention help to contain an outbreak.

The states troubles mounted with acceptance of the 13th Finance Commission recommendations by the central government that under assessed the states committed liabilities resulting into about a shortfall of about Rs 3000 crore allocation for a five year period.

Despite presence of Anand Sharma as commerce minister and Virbhadra Singh as steel minister in the union cabinet, the state suffered a second successive jolt early in the year as the centre refused to extend the industrial package for the hill states of Himachal and Uttrakhand.

The Prem Kumar Dhumal led BJP state government termed is as a breach of trust after former prime minister Atal Bihari Vaypayee government had announced it for a ten year term in 2003 and held the opposition led state governments were being discriminated against.

Presented in March, the state budget did not hold many surprises but constraints of a financial crunch was evident as about Rs 2000 crore salary and pension arrears for the 2006-09 period on account of a hike recommended by the 6th pay commission needed to be paid.

During the budget session, forest minister JP Nadda decided to opt out of Dhumal’s cabinet to work for the party and joined BJP president Nitin Gadkariâ€™s national team at Delhi. The vacancy in the cabinet remained unfulfilled in the year.

To update the state demographics, the census 2010 got underway in March.

Congress president Sonia Gandhi was roped in to lay the foundation stone for the ambitious Rohtang Tunnel, a defense ministry project, to connect Kullu-Manali valley with Lahul in June.

Low precipitation in the winter did not hit fruit and vegetable production. However, a heavy monsoon coupled with bad road conditions hit marketing operations of apples, one of the main cash crops in the state. Heavy rains filled up most reservoirs but left behind a trail of heavy damages to private and public property.

With the odds stacked against the hill state, Himachal bagged the prestigious â€˜state of stateâ€™ awards for social indicators and other performance parameters and was conferred the best state prize by vice president Hamid Ansari.

Though Kaul Singh Thakur was re-appointed as Pradesh Congress President by party president Sonia Gandhi for a second successive term, the party in the state remained a divided house that was unable to muster together effective opposition.

Unable to pin the government on any major issue or organize any mass movement, much of the opposition was only witnessed in staging walkouts during assembly sessions.

Frequent visits of the union steel minister Virbhadra Singh to the state proved bothersome to the ruling party as the central minister used the occasions to vent ire at the state government plans and policies.

By the year end, it was the chief minister who had got the better of Virbhadra as the courts refused to quash an FIR registered under the Prevention of Corruption Act against the latter in a contentious audio CD case. A second plea to transfer the case investigation from state police to CBI was rejected.

Before close of the year, police had presented a charge sheet against the union minister in court, who had to present himself before the district judge and was let out on bail.

Rising concerns about environment had environmentalist up the ante for developers of hydropower projects and cement units. While the union ministry for forest and environment put spanners in Kol Dam and Renuka Dam project, the High Court dashed plans for setting up a cement plant at Sundernagar by quashing the environmental nod obtained without holding a mandatory public hearing for it.

Working overtime to clear pendency, the High Court itself got embroiled in controversy over shifting of Shimla district courts to a new location, with lawyers taking to the streets and burning effigies in defiance.

Man-animal conflict caused a sharp division between the animal rights lobby and farmers over culling operations as wildlife wardens issued licenses to shoot down monkeys, wild boars and neelgai (antelopes) that were damaging crops. The issue is pending before the courts.

Whereas the government made a push for turning the state into a educational hub and approved several proposals for setting up private universities, it was a major fake certificate scam at the HP School Education Board that exposed the rot within.

With several hundred students having managed to obtain pass certificates from the board without having appeared in any examination, the government had instituted an inquiry and the culprits were being booked.

To regulate the higher education, the government adopted an innovative legislation for setting up an education regulatory commission to oversee the education sector.