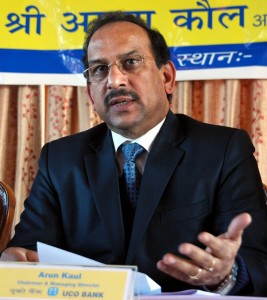 Shimla: By taking into account large investments made into the hydropower sector and cements plants by banks based in other states, the stateâ€™s credit deposit (CD) ratio has shot up sharply for 43 % in the June quarter to 70 % in the September quarter.

After holding the state level bankers committee (SLBC) meet, Arun Kaul, Chairman and Managing Director UCO Bank let the media know that Rs 7221 crores bank credit from other states that had invested in Himachal, has now Thorat committee recommendations been accounted for as the overall credit in Himachal, significantly increasing the credit: deposit ratio from 43% to Â 70 percent.

Field general manager UCO and convener SLBC, Ripan Murgai said that though the state CD ratio was now comfortable but imbalances at district levels remained. After having attained total financial inclusion, banks have beengiven the target of achieving full credit inclusion in the state, he said.

Under the financial inclusion plan for 48 villages, a banking correspondent model by the bankers would be completed well before March 2011, said Murgai.

The meet was informed that there were 414,197 active Kishan Credit Cards in Himachal involving an amount of Rs 2148 crores as on September, 2010.

Against an target of Rs 582 crore Â for medium and small entriprise, banks had been able to disburse Rs 980 crores.

Deposits grew at 18% in the quarter and had reached a level of Rs 36,184 crore, and advances had grown by 16% to touch Rs 16,736 crore. By September, banks in the financial year had disbursed fresh loans amounting to Rs 3401 crore.

With the state having recorded a bumper apple harvest, loan recovery hadcrossed 75 percent in Himachal and would reduce NPA levels below the existing 2.51 percent.For all India operation of UCO bank, CMD Kaul said that even though theoperating profit for the September quarter was Rs 705 Crore, marking a qoqgrowth of 91.58 % but the net profit was only 119 crore a decline of 42.78% for the reporting quarter.