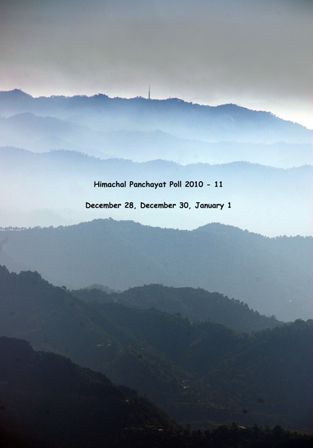 Shimla: The state election commission today announced a three phase election to the 3032 Panchayati Raj Institutions in the state which are to be held on December 28, 30 and would spill into the new year to conclude on 1st January.

With announcing of the election dates, Dev Swaroop, state election commissioner said, â€œthe model code of conduct has come into effect after notification of polls and it would remain effective till completion of election process on January 6 next year.

Nominations would be filed on December 10, 13 and 14, scrutiny would take place on December 15 and withdrawal of nomination would be allowed upto December 18.

Elections are to be held in 3195 of the existing 3243 panchayats, 75 of the existing 77 block Samitiâ€™s and for 11 of the 12 zila parishads. Voters would have to cast five votes to elect the Panch, Panchayat president and Vice President, Block Samiti Members and Zila Parishad members.

Elections to remaining PRIs were not being held, as their term was not expiring along with other PRIs on January 25 and elections to the remaining 48 panchayats would be held in March next year.

â€œThere is some dispute over the completion of tenure of some of the panchayats. So we have decided to conduct the elections in March,â€ he said.

As many as 3159 panchayat presidents and vice presidents, 19,159 panches, 1651 Block Samiti members and 240 Zila Parishad members are to be elected.

By amending the act 50 % of the seats have been reserved for women in PRIs with the exception that the post of Vice President has been exempted from reservation.

For the first time in history of PRI elections, the persons who had encroached upon government lands would be disqualified to contest elections and the respective returning officers would ask the candidates to make declaration in this regard.

The panchayat elections would be held on a non-party basis — which means that the candidates from any political party would not contest the election on party symbol and ticket.

Elections are being held in three phases for logistic reasons as same staff would be used in all three phases and the strength of total staff employed would be about 50,000 including the police, Dev Swaroop said.