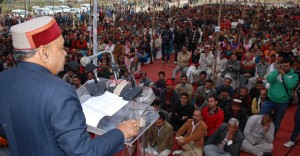 Shimla: To overcome the constraints for marketing apples, mainstay of the agri-economy in Shimla hills, chief minister Prem Kumar Dhumal today laid a foundation stone for establishing a large marketing yard at Parala, near Theog.

Addressing a gathering of farmers after the foundation stone laying ceremony, Dhumal said that the new agri-market would incur an expenditure of about Rs 100 crore and a 86.5 Km long dedicated horticulture road linking Chhaila-Neripur-Oachghat-Kumarhati would be constructed for providing access to the marketing yard.

The marketing complex would be constructed in three phases and was designed to handle 2 lakh metric tons of fruit and 1.5 lakhs metric tons of vegetables at a time. In the first phase auction hall, grading, packing line, loading and unloading platforms, administrative block and banking facilities would be created.

In the second phase, shops for traders, storage houses would be constructed and in the third and final phase besides residential facilities to the employees, rest houses for growers and traders would be constructed in addition to the cold storage and ripening chambers, said the chief minister.

Construction of the dedicated road would entail an additional expenditure of about Rs 100 crore and existing bridges and road would need to be widened for double lane standards, he said.

The government was committed to strengthening the agricultural produce marketing network in the state. The Solan marketing yard had done a record business of Rs 200 crore, this season, he said.

The chief minister said that modern marketing yards would be constructed at Bandrol in district Kullu, Ghumarwin in district Bilaspur, Karsog in district Mandi and Haripurdhar in district Sirmour.

Horticulture minister Narender Bragta on the occasion said that modern marketing facilities would be of immense benefit to the fruit growing community.

Besides apple, mango, tomato, potato and ginger had been brought under the ambit of crop insurance schemes said the minister and mentioned that a Rs 85 crore apple rejuvenation scheme had been launched to change plant material to high yielding varieties.

The minister claimed that despite difficult geographical conditions about 5 crore apple boxes had been marketed in the current season which had averaged and price of Rs 772/- per box.

Others who spoke on the occasion included Virender Kashyap, MP, Rakesh Verma â€“ the local MLA, Suresh Bhardwaj, MLA from Shimla and Radha Raman Shastri, a former speaker of the Vidhan Sabha.