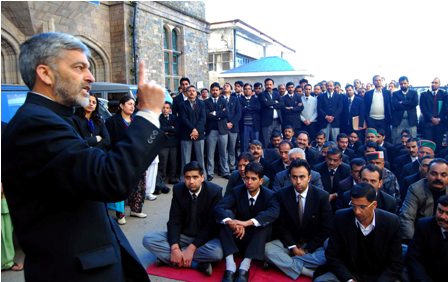 Shimla : After having spent about Rs 30 crores to construct a new district judicial complex, lawyers are up in arms against a move to shift into the new courts that is a little way out from the city center.

Showing resentment that the new judicial complex was constructed without taken the Shimla Bar Association into confidence, the members have resorted to a token strike and threaten to intensify the agitation should the matter not be resolved.

â€œThe judicial complex coming up at Chakkar is not only an inconvenient place for both lawyers and litigants but bar association was never taken into confidence when the High Court,â€ says Bhupinder Kanwar, a member of SBA.

Sources said that the site selection was done after the association had moved a petition before the High Court seeking more spacious accommodation to house the district courts as the Deputy Commissioners office complex where it presently is housed was not enough.

Harish Khanna, president SBA says â€œa one hour daily sit in token protest has been started by the lawyers against the move to shift the district courts from the DCâ€™s office complex.â€

He adds that the Himachal Pradesh High Court had deceived the association by first selecting a site at Khalini for construction of the judicial complex and then unilaterally withdrawing and approving the Chakkar site, which has been opposed by the association from the start.

Overriding the strict green norms of the city, forest land was diverted for construction of the complex and over 600 trees were felled to construct the new complex, says Kanwar.

Despite the bar associationâ€™s opposition to the Chakkar site, the former chief justice of HP High Court laid the foundation stone of the new complex, which is under construction, said Khanna.

When contacted, a spokesperson of the HP High Court refrained to comment saying, â€œthe writ petition filed by lawyers was still pending before the High Court.â€

However, a High Court judicial officer on conditions of anonymity said, â€œthe High Court has nothing to do with the controversy. Constructing of a judicial complex was a government function, which was done at the behest of the lawyers who had petitioned the court for a new complex.