Shimla: With excise and taxation department having launched an e-payment gateway for depositing VAT, chief minister Prem Kumar Dhumal today launched the portal by accepting the first e-tax payment on the new facility. 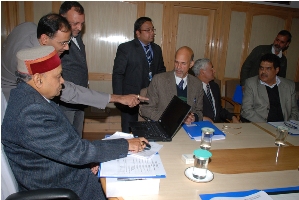 Speaking on the occasion, Dhumal said efforts in extending e-governance had enabled the government to extend electronic payment of VAT for businessman. Initially the facility would be available to the traders having TIN Numbers, he added.

The new facility would permit making electronic VAT payments upto 9 p.m., which was a cost effective tax administration step and would also allow businessmen to make payments from any part of the world.

The department would soon be launching e-return service for the benefit of the traders, said the chief minister.

The government was pushing for IT enabled citizen centric services for which setting up of 3366 Common Service Centre ‘Lok Mitra Kendra’ had been approved and 2667 such centers had already become operational. These centres would be instrumental in delivering various services at the door steps of the residents. The Lok Mitra Kendra centers would be functioning under integrated systems for effective monitoring and unified view for quick response, he said.