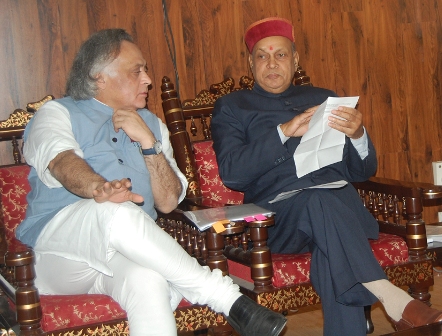 New Delhi: With the union environment ministry putting a spanner in many hydropower and other projects, chief minister Prem Kumar Dhumal today called upon Jairam Ramesh, the union minister for environment and forest at Delhi and apprised him of adherence to environmental laws in Himachal Pradesh.

The chief minister let the central minister know that the state was strictly enforcing the forest conservations act and environmental laws in various hydel electric and other developmental projects being commissioned.

Utmost care was being taken in implementing eco-tourism projects and no new structure for construction was being permitted in forest areas, he said.

The chief minister after detailing about the status of various projects that were pending environmental clearance with the union ministry lobbied for early clearances so that economy activity could be speeded up.

Ramesh sought additional information about the projects awaiting clearance, while appreciating the steps taken by the hill state in environmental protection.