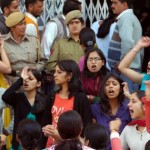 Shimla: Demanding security in the hostels girls students at Himachal Pradesh University held a protest demonstration today after having raised an alarm on Wednesday evening about an intruder being spotted in the hostel bathroom. The university authorities have registered a complaint with the police though a thorough search turned up nobody.

Police at Summer Hill sub-post did confirm that a complaint in the matter had been lodged. On learning about the complaint, a police party was rushed and nobody was found during the search, said the police spokesman.

Narrating the incident chief warden Kulwant Pathania said that the hostel girls raised an alarm at 9.15 p.m about an intruder being spotted in the bathroom.

A security check with the help of police was undertaken but no one was found to be hiding in the dark, he added.
Pathania said that the girls claimed that the intruder had sneaked in from a window opening in the bathroom, which had no grills.

â€œThe bathroom through which the intruder is said to have come in is on the 3rd floor and escaping in such short time from the same window is potentially very dangerous,â€ he said. 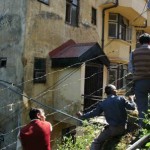 The warden said that extra security has been deployed in the hostel, fencing of the hostel premises is being fortified and grills and wire meshes have been added to any possible place from an intruder could try to break into the building, said Pathania.