You have to have nerves of steel to drive on the roads of Himachal Pradesh this year as you encounter deep ruts, potholes, mudslides, slush and always the relentless dust pummeling you.

Barley a few months ago it was a relatively smooth drive on many of these roads, added to this were the spectacular views of the countryside.But these winding roads have now turned into a nightmare. 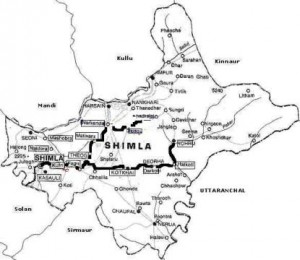 They are the main arteries in the region, passing through Himachalâ€™s apple heartland.But in many places it scarcely looks like a road, instead for long stretches you find yourself driving on a dry uneven river bed with sand, slush,pebbles and deep holes.

And always you are engulfed by clouds of dust. Mile after mile the road has been turned into a dust bowl, as if one were caught in a dust storm in a desert.

The big jolts on every bend can shake your spine and spin your head and give you visions of hell. The road takes its toll on the vehicles, break downs are frequent with no help for miles.

And worse despite the slow speeds the overturning of trucks is a common sight.

If you have driven successfully on these two roads during the past few months you are sure to qualify for any of the toughest motor rallies in the world.

Usually the 80 km Theog-Hatkoti road takes 3 hours by car.But for the last four months it has taken 6 to 24 hours.

You find yourself trapped between giant trucks threatening to crush you, stuck for hours in the traffic jams, so that you could be spending the night in your car or bus without water and food—–as if it were a war like situation !

The travel duration has reduced since the last fortnight or so,not because the road has improved,instead it has worsened despite the rains ending a month ago.

The only respite is the volume of traffic which has gone down,particularly trucks have reduced considerably after the ending of the bumper apple harvest in the area earlier this month.

The biggest realisation after travelling on these wild roads is the sheer absence of the government.

Believe it or not, a month after the monsoon rains have ended there is no restoration work going on,as if nature alone has been allowed to take care and heal the damaged roads.

As if the area has been forgotten by the government in Shimla and allowed to suffer and bleed, many allege deliberately !

While the anger seems to be often directed at the stateâ€™s horticulture minister Narender Bragta for failing to stand by the people during this crisis.He has been accused of being in denial instead.

But it would be unfair to target him entirely. It is the state chief minister Prem Kumar Dhumal who needs to answer the people for neglecting them in this callous manner. Many say the least he can do is to offer an apology.

Dhumalâ€™s right hand man Gulab Singh the stateâ€™s PWD minister needs to wake up and repair these roads.People are already calling him the worst PWD minister in the state for a long time.

The local MLAs havenâ€™t even bothered to reach out to the people,strangely they have chosen to remain silent.

As if this wasnâ€™t enough the opposition Congress leaders seem to be day dreaming, Vidya Stokes, Kaul Singh and Virbhadra Singh. But for issuing mild press statements they have failed to voice the pain and agony of the people.

Not one Congress leader has reached out to the people of upper Shimla in this difficult time people allege,not one of them has taken on the ruling BJP for this utter neglect and apathy.

It only remains to be seen if the people of the state have the courage and vision to unite and punish all their lazy and uncaring politicians, for taking them on a rough and painful ride !