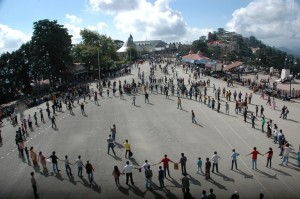 Shimla: Unable to move the municipal authorities for public space for children playground and parks, Youth Enlightening the Society (YES), a NGO of young boys and girls, in defiance held a cricket match on The Ridge after creating a human chain on Saturday.

However, with just a small innings of 5 overâ€™s played out, police intervened and disrupted the protest game the young children were thoroughly enjoying.

Crowding out of public space by concrete buildings and most pathways having been encroached upon by vehicular traffic (which includes a major portion of The Mall Road) children and young people have come together to hold this unique protest to highlight their plight.

Speaking to My Himachal, Aakarshan Chauhan, president YES said, Shimla is facing a growing problem of drug abuse among children and the youth.

â€œOne of the causes indentified is mounting academic burden and decreasing space for playgrounds. Since children donâ€™t count in the democratic order as they donâ€™t have voting power nobody heeds to their problems, he said.

Separately, in response to a letter by a small girl, the Himachal High Court has taken cognizance of the matter and issued a notice to the Shimla Muncipal Corporation.