Shimla: With number of tourists visiting Himachal increasing each year, chief minister Prem Kumar Dhumal said the government was stepping in to upgrade infrastructural facilities, especially to motivate high end tourists to holiday in the state.

Speaking at the valedictory function of World Tourism Week Celebration, jointly organized by the tourism department and HP University on Monday evening, Dhumal said that in 2009-10 a record number of 1.40 crore tourists had visited the state.

The number would multiply further if a more tourist friendly environment is ensured, he said. Adhering to high profession ethics could supplement the efforts to promote â€˜Unforgetable Himachalâ€™ brand as it was one of the major income generating avocation for a sizable portion of the population, said Dhumal.

To provide a glimpse of hill lifestyle, the government had launched â€˜Home Stayâ€™ scheme, wherein tourists get to stay in traditional homes and learn about hill culture, traditions and customs. A large number of people, especially in tribal areas had registered their homes under the scheme, he said. 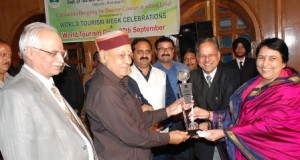 Introducing the Shimla City Tour with heritage tales of â€˜Har Ghar Kuchh Kehta Haiâ€™ for showcasing the historical importance of the city is another effort to engage the tourists, said Dhumal. Such initiatives had been lauded at both national and international level, which have helped the state to win the Best Destination Trophy award for 3rd time consecutively.

Manisha Nanda, principal secretary tourism, said that in the preceding year the state attracted Rs 705 crore investments in the sector. The number of tourists was likely to surpass last year number, she added.

Arun Kumar, director tourism made a detailed presentation about the initiative taken for boosting tourism activities.