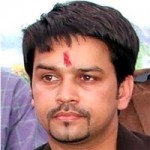 Shimla: A representative from Himachal, Anurag Thakur, for the first time has found a place on the governing council BCCI, the controlling body of Cricket in India.

On being nominated to the BCCI governing council body Thakur said â€œIt is a great achievement for our small state of Himachal and we would continue to strive for improving the cricketing infrastructure in the state.

Thakur who also happens to be a member of parliament from Hamirpur, said a seat on the governing council of BCCI was a responsibility which he would discharge to his best abilities.