Shimla: Having made some amendments to the states power policy today, the Himachal cabinet has decided to revamp the old document and come out with a new policy even as it agreed to synchronize vacation schedules of winter and monsoon closing schools for having a uniform academic year. 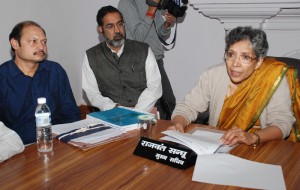 Briefing the media, chief secretary Rajwant Sandhu said that with many changes having come about since the 2006 power policy was formulated, the cabinet agreed upon revising it after holding consultative discussions with power producers and other stake holders to come forth with a 2010 power policy.

The decision to have a new policy notwithstanding, the cabinet presided over by chief minister Prem Kumar Dhumal amended the existing policy to withdraw the power of providing techno-economic clearance for projects involving investment upto Rs 500 crore from HP State Electricity Board, which would henceforth be dealt directly by the department of energy.

For optimum use of transmission lines to evacuate power, the cabinet amended the existing policy. As the government has prepared a draft master plan for having a single river basin transmission line for which a loan of $300 million was being availed from Asian Development Bank by HP Transmission Corporation, the policy amended was carried out to deter laying of multiple transmission lines, explained Deepak Sanan, power secretary who was also present.

After taking changing climatic patterns into account, the cabinet approved adoption of a similar winter and monsoon holiday schedule in schools for having a uniform academic year.

Besides the high altitude district of Lahaul-Spiti, the other districts would have a winter break in January and a monsoon break in July-August. A weekâ€™s break for Diwali has been introduced in all districts except for Kullu and Lahaul-Spiti which would get a Dusshera break instead.

â€œStaring from 1st April, 2011, the academic year in all schools would close in March 2012 and all teachers who retire mid-term, would be re-employed on contract till closing of the session so that students education is not affected due to non-availability of teachers,â€ said Shrikant Baldi, secretary education who was present at the news briefing.

The cabinet agreed to change the definition of Bhakra Dam Outsees so as to settle 364 uprooted families because of the mega project and finally settle the problem of rehabilitation and resettlement of project affected families, almost 50 years after the project was commissioned, said the chief secretary.

The cabinet consented to create 32 posts of Professors, Associate Professors and Assistant Professors in Tanda Medical College for manning super speciality departments under Pradhan Mantri Swasthya Suraksha Yojna to meet the requirements of Medical Council of India for starting the MD-MS courses, said Sandhu.
i