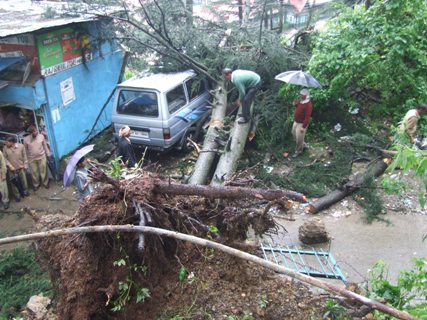 Shimla: Snow in the higher reaches and heavy rains in the mid and lower hills have thrown life out of gear, with road communications in many areas breaking down because of landslides and rivers in spate having increased inflows at the already full dam sites of Bhakra and Pong.

The high pass of Kunzam La, connecting Lahaul valley with Spiti valley, had a fresh bout of snow fall.

Mamta Chaudhary, deputy commissioner Kinnaur reported heavy losses to roads, agricultural lands, and houses in the district. One person at Natpha, on the national highway between Rampur and Peo was buried in a landslide. The Kinnaur highway is blocked at several places, she said.

â€œAn alert has been sounded in the district and people have been asked to stay indoors. Thursday has been declared a holiday in schools,â€ she said.

Though the administration was able to evacuate 43 trekkers on Tuesday but another 51 tourists, which include 5 French nationals, 11 Germans, 8 Israeliâ€™s and 27 Bengali tourists are stranded in Sangla as the Karcham- Sangla road is blocked because of a rock fall, said Chaudhary. Efforts are being made to open the road, she added.

Kullu deputy commissioner BM Nainta said that there was widespread rains throughout the region but the Rohtang Pass, connecting Kullu valley with Lahaul valley was open.

A police spokesman said that traffic on the Shimla- Kalka highway was disrupted near Solan. The beaten track of the Theog-Kotkhai-Jubbal road was blocked at several places because of landslides or traffic jams and the Chopal road was also blocked by landslides â€“ disrupting marketing operations of apples.

Dhumal has asked senior PWD officials â€œto ensure restoration of all damaged roads and those roads which require special repair, extra force be deployed to restore them in the minimum possible time.â€

Weatherman Manmohan Singh reported that Shimla had got 81.7 mm of rain by Wednesday morning; Bhuntar in Kullu district had 21.6 mm, Solan 39 mm, Nahan in Sirmaur district had 15.2 mm and Sundernagar in Mandi district 11.1 mm.

With incessant rains pouring throughout the day, more rain was forecast for the next three days.

The state has received more than the average rain for the season leading to dams holding back record storage. Both the major dams, Bhakra and Pong had to open their flood gates to release excess water, with Pong flood gates being opened after a span of 15 years.