Shimla: Rattled by Himachal High Court having turned down a plea for a CBI investigation in the infamous CD case, union steel minister Virbhadra Singh today said that various options lay open, including re-approaching the same court or filing a special leave petition before the Supreme Court in the matter 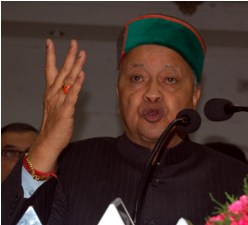 Talking to media persons, Virbhadra said that this court case would not stop his fight against the misrule of chief minister Prem Kumar Dhumal and his BJP government, where corruption was rampant.

â€œBeing a public figure, Iâ€™m open to transparent scrutiny and have been demanding a CBI inquiry into the audio CD conspiracy case against me as I do not have faith in the state government machinery which is misusing the state vigilance bureau to frame me,â€ he said.

â€œI have more faith in a central investigating agency as the state was using the police for settling political vendetta,â€ he added.

He said that before framing of charges in the case, options of approaching the High Court again or the Supreme Court remained open as the court order had refrained the investigating agency from filing of the challan in the trial court for 15 days.

Reading out a passage from the court order that turned down the plea for transferring the case investigation to CBI, the union minister said that it was wrong to say that the order had rejected his petition for quashing of the very FIR in the case as they had not pressed the matter before the court.

The court turned down the plea for transfer of case investigation to CBI on 3rd September on the grounds that without considering the material collected by the investigating agency till now it cannot be said that the case is fit or not for CBI investigations, he said.

Making a reference to another set of two audio CDs, which are allegedly said to contain the voices of Dhumal and police chief DS Manhas, he said that dual investigation standards were being applied when it came to investigations the content of these CDs .

â€œInstead of investigating the contents of the CD, the investigation is focusing on trying to figure out as to who mailed this material, whereas no effort has been made to establish the source of the fabricated audio CD against me even though a forensic lab had already questioned its authenticity.

Alluding to reports about Dhumal having acquire properties after coming to power, Virbhadra said that after vesting ancestral property with the state and retaining only what was permissible under the law, he had not bought any other property even after of being in public life for 48 year, other than a flat in Delhi, which he had got as a member of a MPs society.