Shimla: With traditional water sources being encroached upon and damages to public water supply schemes increasing, the government is contemplating appointing about 5000 people for guarding the schemes so as to ensure regular water supply.

Chief Minister Prem Kumar Dhumal after presiding over a review meeting of irrigation and public health department said that the government was considering recruiting part time guards for securing and managing water supply schemes. â€œIt would also generate jobs for about 5000 rural jobs,â€ he said. 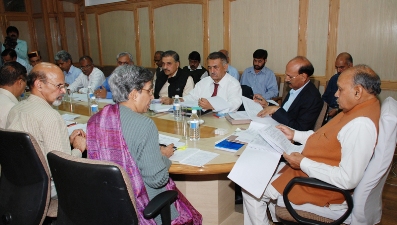 Emphasizing upon the need to revive traditional water sources, the chief minister asked the authorities to get encroached common lands evacuated where water bodies existed for storing rain water.

To ensure safe chlorinated drinking water, the department would be shifting from using bleaching powder to gas chlorination system in major schemes, he disclosed.

He said that 56 towns in state had dedicated drinking water supply schemes and to meet additional needs 43 schemes had even augmented. Sewerage schemes were being set up in 22 towns, while they had been completed in 17 others.

Ravinder Ravi, the IPH minister let the meeting know that the department had bored 21,859 hand pumps to supplement water supply schemes and has a target of installing 2,500 pumps in the current financial year.

The department was considering constitution of a Krishi Vikas Sangh so as to handover management of the water supply schemes to them for effective operation, he said.

Chief secretary Rajwant Sandhu, stressed upon prioritizing schemes that were nearing completion. She also underlined the need for undertaking survey of sewerage schemes, which were faulty and said that they should be put to use after taking corrective measures.

Narinder Chauhan, Principal Secretary, IPH apprised the meet about the various initiatives taken in addition to financial and physical achievements made.