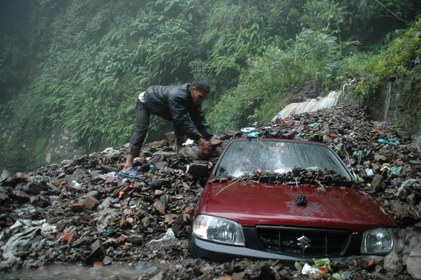 Shimla: A severe storm lashed Shimla in the afternoon leading to trees falling on the road, retaining walls giving way and slush from overflowing streams disrupting traffic in which one vehicle was buried.

Trees coming off and falling onto the roads at Tara Hall School, near the High court and near Indira Gandhi Medical College led to traffic coming to a halt on most of the circular road in the city for over about 3 hours. By 3 p.m. the city had recorded 80 mm of rain.

Deputy commissioner JS Rana said that no one vehicle was damaged by slush from an overflowing stream but no one was injured in the incident.

The traffic jam also caused disruption of traffic on the Kalka-Shimla-Rampur highway as the road passes through the city.

Tourists, day commuters, and day school children were trapped on the road for about two hours.
Later in the evening traffic was restored.

The storm also caused a disruption in tele-communications, affecting mobile and landline networks. Most bank ATMs were non-functional because of break in satellite links.

Elsewhere, fifty cattle heads were washed away in a cloudburst in Chamba district.

The meteorological office has predicted heavy rains in some parts over the next 24 hours.

Meanwhile generation at the 1500 MW Jhakri plant that was hit on Monday was restored today after a 24 hours shutdown due to rise in silt levels at dam reservoir in Nathpa on Satluj River.

â€œThe plant if operating normally today,â€ said a SJVN spokesman, the company that operates the plant.