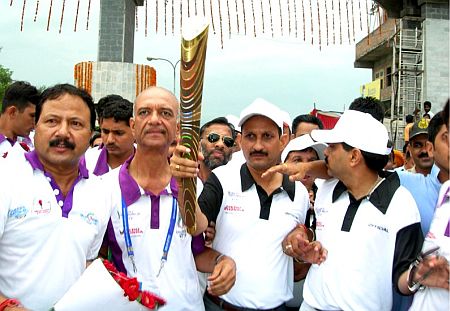 Shimla: Starting out from Dharamshala, the Queenâ€™s Baton Relay today passed through Hamirpur, Bilaspur by and reached Shimla by the evening to a rousing reception.

In Shimla the Baton was received by Anurag Thakur, MP and vice-president of Indian Olympic Association.

â€œFor Himachal and its people, it is a momentous occasion to be part and parcel of the relay, said Thakur.

Earlier at Bilaspur it was received by Rikhi Ram Kaundal, the deputy speaker of the Vidhan Sabha. Ram Lal Thakur, vice-president of Indian Olympic Association and Randhir Sharma BJP MLA along with school children was also present on the occasion.

Earlier, after paying obeisance at the famous temple of Jawalamukhi, state cabinet minister Ramesh Dhawala received the Baton and accompanied the relay when it reached Hamirpur.

It was a matter of immense delight that after entering the India at Wagah border, Himachal was the fourth state after Punjab, Jammu and Kashmir and Union Territory of Chandigarh to have got the privilege of welcoming Queenâ€™s Baton, said Ravinder Ravi on the occasion.

On Sunday when the Queen Baton Relay entered Himachal at Mehatpur in Una district, the occasion was marked with festivity and euphoria amidst beating of drums and loud applause by thousands of children who had assembled to witness the moment.

â€œIt is a joyous moment for me to be a part of the team to carry the Queen Baton in Dev Bhoomi Himachalâ€ said Deepak Thakur, a member of Indian hockey team who hails from Una.

Over a span of three day the Baton is scheduled to traverse through the districts of Kangra at Dharamshala, Hamirpur, Bilaspur, Shimla, Solan and Sirmaur to be finally handed over to the Uttarakhand authorities on 6th of this month.

JR Katwal, Director Youth Services and Sports and the nodal officer of relay honoured National and International players on the occasion.

Spreading the message of goodwill and harmony while advocating for measures to be adopted so as to preserve the ecology, the Baton over the last 250 days has covered more than 70 countries and travelled more than 171,500 Kms.

The Queen’s Baton Relay introduced in 1958 is similar to the Olympic Torch relay. It is a relay around the world held prior to the beginning of the Commonwealth Games.

The Baton carries a message from the Head of the Commonwealth, Queen Elizabeth II and traditionally begins at Buckingham Palace in London as a part of the city’s Commonwealth Day festivities.

The Queen entrusts the baton to the first relay runner. At the Opening Ceremony of the Games, the final relay runner hands the baton back to the Queen or her representative, who reads the message aloud to officially open the Games.