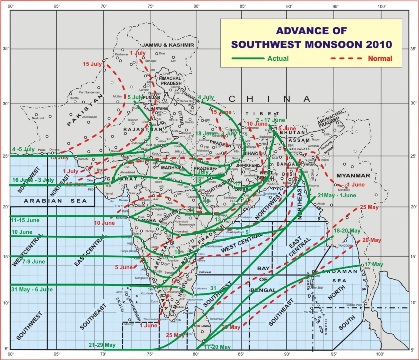 Shimla:: Heavy rain showers that started out around mid-night and last till mid-day marked the onslaught of monsoon here even as the meteorological office announced the arrival of southwest monsoon in Himachal Pradesh along with other states of north India.

Rainfall occurred at many places in the state during the last 24 hrs and at some places it was heavy (more than 70 mm) rain, a met office communiquÃ© stated.

Between June and July 5, most of the districts in Himachal received normal or excess rain. District Kinnaur received 172 % more rainfall during this period. District Chamba, Hamirpur and Kangra received deficient rainfall whereas the overall rainfall recorded during the period was 14% more than normal, said the met office.

The weatherman has forecast more rain accompanied by thundershowers at places in most places across the state and has warned that very heavy rain could occur at a few places over the next 36 hours.