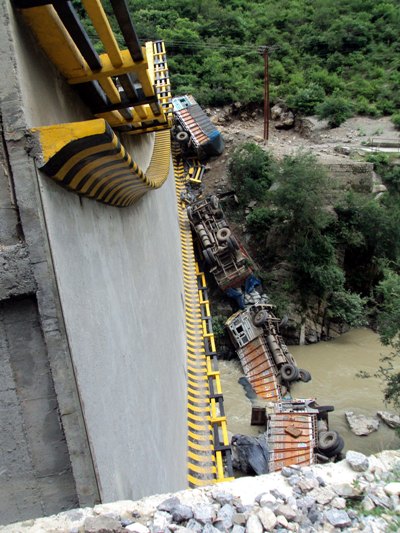 Shimla: A freak accident killed two persons and left another two injured when on a newly constructed defense bridge that had four loaded trucks parked on one side overturned the bridge itself, plunging the vehicles into the stream.

The truckers who were moving on the Basantpur-Kingal road in Shimla district were carrying a load of cement bags and had stopped over for dinner by parking the vehicles on the bridge, when the accident happened.

While others were still eating away at a wayside Dhaba, two persons who were in one truck went down with the vehicle into the stream and were killed by the very impact. Two others, who were also on the bridge, however, survived with minor injuries. 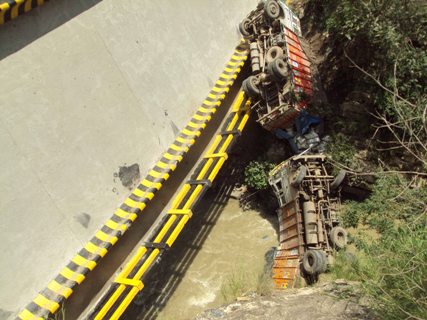 IR Mathur, chief engineer of the Indian Army’s Deepak Project here, who are responsible for construction and upkeep of Kingal Basantpur defence road said, â€œIt was a surprise for us that how a year old bridge could overturn in such a manner.â€

â€œOn inspection,â€ he said, â€œthere appears to be no construction flaw as the bridge slab after the fall is intact and so are the abetments on which it stood but how it came off is hard to figure out.â€

The bridge was designed to withstand a 70 ton load. The matter is being investigated as to how the whole bridge slab overturned, said Mathur.

RM Sharma, SP Shimla said that a case has been registered and the matter is being investigated.