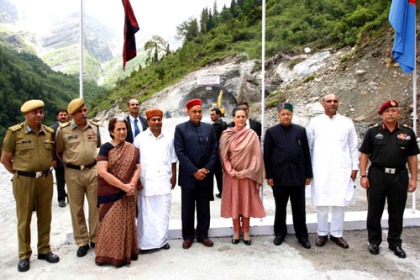 Manali: Congress president Sonia Gandhi today laid the foundation for an 8.8 Kilometer long tunnel that would pierce through hard Himalayan rock of the Pir Panjal range to connect Kullu valley with Lahaul under Rohtang Pass and provide an opportunity for an alternate security road to Ladhak.

The lady pressed a remote control button to bring into life a giant excavator, which symbolically started the boring operation on the south portal of the tunnel at Dhundi, 25 Kms from Manali.

Seeking the blessings of the gods, a plurality of priests consisting of Hindu, Christian, Muslim and Buddhist faiths held a prayer meeting before commencement of work. 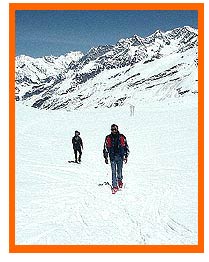 The tunnel has a construction schedule spread over five years and three months and is expected to be completed by February 2015 at a cost of Rs 1495 crores.

Civilian and security forces have been demanding this tunnel for long so as to over the come the geographical obstacle of limited access of Lahaul valley from Manali because of the heavy snows on 13,050 feet high Rohtang Pass that snaps ties between the two valleys for over six months in a year. 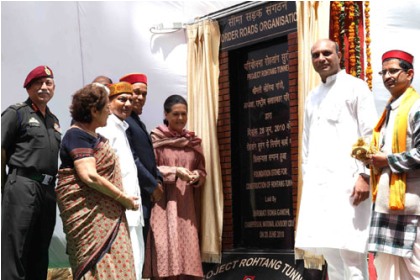 The horseshoe tunnel cross section with a width of 11.25 meters would provide for a two way traffic lane and have a semi-transverse ventilation system for ensuring healthy air circulation. 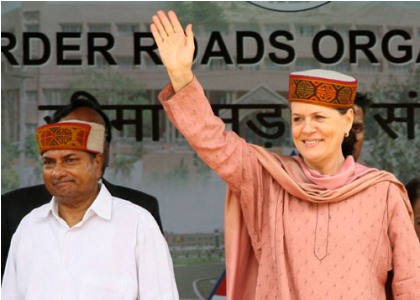 Addressing a public gathering near Manali, Sonia Gandhi said, “the tunnel will give a boost to tourism in the region, facilitate better access for medical treatment and provide more avenues of employment to the youth.”

The tunnel is being constructed under the aegis of Borders Roads Organisation (BRO) by STRABAG-AFCONS, a joint venture concern between Indiaâ€™s Afcons Infrastructure Ltd and Strabag SE of Austria, which is counted among the largest construction company’s in the world.