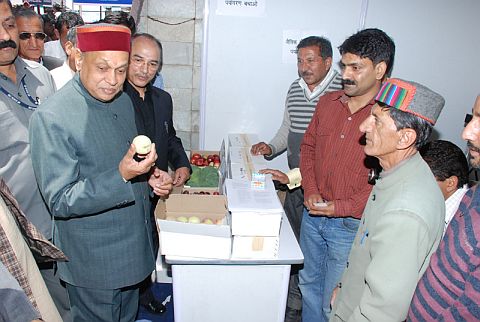 Shimla: At selected hotels, Himachal Tourism Corporation is to include cuisines made out of organic produce as part of it specialty for tourists, chief minister Prem Kumar Dhumal who is also minister for tourism disclosed today.

Speaking at the inaugural of a 3 day Organic Fair and Food Festival, the chief minister said, â€œWhy adopt organic? This is not a question anymore but had become a need for sustainable agriculture as well as a means for achieving better health.â€

Counting himself as the only chief minister in the country who had retained both agriculture and animal husbandry ministries, Dhumal said that against an average outlay of 5 to 6 percent for the farm sector elsewhere in the country, Himachal is spending about 12 % on agriculture in order to farming a viable self employed and self-reliant option.

He said that organic agriculture practices were conducive for a better environment and were best in adapting to global warming and climate changes being witnessed. Food devoid of harmful chemical inputs was better for human and animal health also as research had shown, said the chief minister.

Nor just to provide a market for organic produce but also to give tourist an option of eating healthier food, dishes made out of organic produce would be made available at select Himachal Tourism hotels, said Dhumal.

Earlier AK Yadav, Director, National Centre for Organic Farming, in his keynote address on the occasion said starting out in 2003-04 from about 40,000 hectares, organic farming had a acreage of about 1.5 lakh hectares today.

To reduce organic food certification costs, he said, a participatory guarantee system was being evolved and would be launched by the year end. While presently the major organic crops grown for export markets were cotton, tea and coffee, for domestic consumption it was oilseeds.

The highest demand for organic foods was for fruits and vegetables and the organic food sector was like to see a quantum jump from the current Rs 150 crore to about 800 crore, in the next few years as more farmers take to it, said Yadav.

Speaking on the occasion, Tej Pratap, Vice Chancellor, CSK Krishi Vishvavidyalaya, called it a historic day in the agriculture history of the State since first such Fair and Festival was being organized.

He deliberated upon the potential available for organic farming and technical back-up available with university scientists.