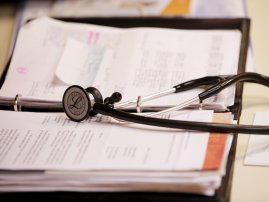 From the last few days doctors in the Himachal Pradesh are in news for Govt. Policies .They are demanding for regularization of their job, but not even one reporter highlighted their need. Why they are doing so? Why they are protesting against the govt.?

So I thought to put light on this news. As we see in Himachal Pradesh government changes every 5 years and every time govt. tries to do something new. Contractual employment started by the Congress regime in Himachal Pradesh but without any clear rules and regulations. First we see why the govt. do the contractual appointments : they pay less money as compared to regular one, less leaves , no other benefits like increments, health bills reimbursement etc etc .. so from this they save money and to make fool of the peoples by saying that see to how much employment we gave to the Himachalies!

Now what are the consequences of this ?

When the contractual appointee joins the job the regular employee of that same department starts feeling as they are superior to them. The Head of the departments sometime humiliate them by taking more works as compare to regular one, by making them feel that they are not the servants of govt. Their fellow employees take more pay even somewhere class IV is taking more pay as compare to higher class, a regular employee use the freedom to paid-leaves and a contract employee is begging for leave. These all factors lead to depression in a contractual employee and finally he started hating the regular one and the outcome is REVOLT.

Earlier doctors in Himachal Pradesh were kept on regular basis direct and as there was only one medical college in Himachal so there jobs were secure, but another college came in and the number increased to hundred. Consequently govt. could not give regular job to all as that would put financial burden and they shifted to contractual jobs. In 2001, 02 or 2003 it happened first time in the history of the Himachal Pradesh that the doctors after passing out from colleges were not provided jobs immediately and they was forced to sit at home. Later on the jobs were provided on contract bases and maximum doctors joined the job and they were regularized through commission or direct orders. Now the current Dhumal led govt. came into the power and they decided to do new thing with implementing RKS which means Rogi Kalyan Samiti.

No one was aware what this is and how it will function but in hurry they started doing appointments by giving higher pay according to the stations. As all the doctors joined with hope that they will regularize the services as earlier they did, but when they started the formulating the polices for post graduation then doctors realized that it is not the same but they were thinking as they formulated the policy like 2 years job for tribal , 3 for hard , 4 for difficult , 5 for rural and 6 for urban. Earlier this policy was 2 years for tribal and 3 years for rest but they changed it. As earlier there was total 39 seats for post graduation in Himachal Pradesh out which 50 % are reserved for all India quota and rest for Himachal now 50 % seats which are left for Himachalies out of this 50 % are reserved for Govt. Duty Officers and rest for Direct candidates, now what they did that 50 % seats which were reserved for Govt. Duty Officer were raised to 70% in 2010 and 80 % in 11 and 90 % in 12 and 95 % in 2013 and only 5 % were kept for direct. Now they divided it further means if there are 4 seats for GDO 3 will be reserved for regular employee and 1 for contractual. Question arises why so? Again discrimination among the doctors. But their dreams shattered today as high court gave decision that govt. duty officer seats cannot be given to contractual employees so it means a contractual employee have to fight for direct seat only.

Now letâ€™s see what the use of GDO seat and direct seat is for Post graduation?

If I am a regular employee and I cleared the exam and get a post graduation seat I will keep withdrawing salary as I was and my service will be counted and I will take all benefits which are taken by the regular employee, on other hand a direct candidate have to leave the job he will get a stipend which is 3 times less as compare to regular one and no service benefits so here again he is in loss. A regular post graduate will start his service again as a regular and a direct will start again a contractual specialized doctor. So, again a discrimination! This year they changed the counseling policy for PG as there was daughter of Dr. Rajiv Bindal who was competing as a general candidate. Letâ€™s see what happened â€¦when the students clear the post graduate exam they are asked to come for counseling and select their subject and it was done in pattern which was followed everywhere in India. Firstly the govt. duty officer are asked to come and pick up seats as there are fixed seats reserved for every category as I told earlier. If any seat is left that is given to direct one. This time paper was difficult and total seats were 21 for GDO but only 16 were qualified so what they did that they removed the 6 seats of those subjects which they wanted to give to their preferred candidates and they asked the general category students come first and pick the seats. This change was not in the favor of any one so GDO doctors filed the case with high court and high court gave a tight slap to govt. to follow the policy which is laid and in the benefit for all. So here also govt. was wrong.

Now letâ€™s look back the gossips around the newspapers

You all must have read the newspapers with the statement of health minister that we kept around 350 doctors on RKS and we are providing them with higher pays as Rs. 3000, Rs.6000 and Rs.9000 and we are looking in their demands and only those demands will be filled which are in the favor of general population. I would like you to read the interview of Dr Gulam Nabi Azad, the Health Minister of Govt. Of India three days back in Amar Ujala. He was asked that why the states are hiring the doctors on contract basis as they are class 1 officers? He said that by hiring they doctors on contract basis they are acting smart as the pay of the contractual doctors are paid by the central govt. under national rural health mission, so I would like to ask the Govt. of Himachal Pradesh that if the pay is paid by central govt. then what they are providing? Nothing if we see â€¦â€¦

Polices are made by the group of peoples which are from administrative side, clearly speaking the IAS and HAS peoples, and 99 % they donâ€™t have the idea about the health on ground level. They are class 1 officers and they donâ€™t want to see other Class-I officers going ahead of them. A doctor pass out around the age of 25 years and he start earning around 25 or 26 years and by that time most of his or her classmates are settled, and if a fresh doctor want to do post graduation then he will be around 30 years without brakes if he passes but in some best colleges like Postgraduate Institute of Medical Education & Research, Chandigarh, if you want to do post graduation under govt. duty officer seats as reserved, there you must have 3 years of regular job. Now this govt. has formulated the policy that after 6 years of contractual job doctors will be regularized it means 6 years contract job 3 years regular job total 9 years to get seat for post graduate and another 3 years to pass total 12 years that leads to 37 years you will start working as a specialist and as we know if we are more than 35 years age we cannot do the registrarship in the medical college. So at this age if someone will keep studying then you can imagine how hard he will studyâ€¦

SO FINALY THE OUTCOME OF THIS WHOLE STORY :