Shimla: For a prelude to holding a two day Film Festival on environmental issues, Delhi based Centre for Media Studies (CMS) is to organizing a Shimla run on Wednesday (30 June,2010) and would be conducting other activities which includes â€˜Green Film Making Workshop For Youth (4th July) as part of â€˜Commonwealth Games: 2010 Low Carbon Fair program. 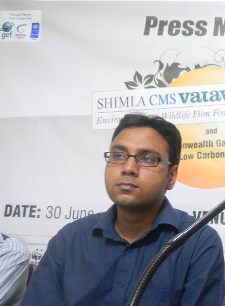 Spokesman of CMS Narender Yadhav said that the run would be on a two kilometer stretch between Himachal Pradesh University and Ambedhkar Chowk in which about 200 participants are expected to participate.

Besides the run, a painting contest for school children would be conducted on July 1, he added.

On July 3, a CMS Environment Low Carbon Primer: workshop for teachers would be conducted at Gaiety Theatre wherein training about communicating about environment related issues and demystifying them for students of secondary and higher secondary would be imparted, he said.

The Green Film Making Workshop is for aspiring filmmakers who would be taught technical details about wild life film-making by a professional environment filmmaker said Yadhav.

In collaboration with WWF India, CMS would for the first time also be holding a two day film festival between July 2 â€“ 4 at Gaiety Theater, entry for which is free.