Shimla: Old temples that backwaters of Bhakra Dam submerged in the early 1960â€™s along with the older township of Bilaspur are to be relocated and the restored. 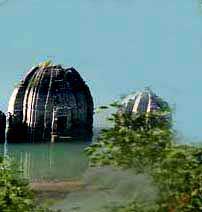 Presiding over a relief and rehabilitation committee meet of those affected by construction the countryâ€™s first large dam, chief minister Prem Kumar Dhumal said that services of archeologists would be requisitioned to relocate the ancient temples submerged in the dam waters.

â€œLand for relocating and restoring these heritage temples is being identified,â€ he said.

After completion, the Bhakra Dam was commissioned on 22nd October 1963 but not before scare 31,191 acres of arable land spread over 256 villages, the old town of Bilaspur centered around the Mandu Maidan with all its heritage structures including temples was submerged.

In all about 28 temples belonging to the 8th and 19th Century (12 considered to be of archeological importance) are recorded to have been submerged by the back waters of what now is called the Gobind Sagar Lake.

When the dam water levels falls during lean winter months, spires of some of the old temples re-surface and archeologists, historians and civil society groups, from time to time, have been asking for relocating these monuments.