Shimla: Chief ministers of Himachal Pradesh and Uttrakhand on Wednesday have written to the Prime Minister, asking him to reconsider restoration of the special industrial granted to them that expired in March, this year. 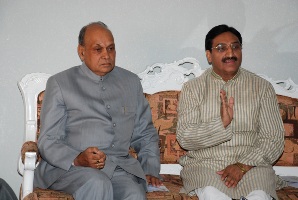 The duo held that the central government was discriminating with BJP ruled states by not extending the industrial package.

â€œWhereas a similar industrial package to northeastern states and Jammu and Kashmir has been extended till 2017, our 10 year package was curtailed to 7 years and closed down in March,â€ they said.

We demand that the package, which includes 100% excise exemption should be restored till its original time frame,â€ the chief ministers said.

Dhumal said even Commerce Minister Anand Sharma had written to the Prime Minister and the Finance Minister on Nov 13, 2009 in which he pointed out â€œâ€¦ these two states (Himachal Pradesh and Uttarakhand) have remained industrially backward due to their geographical locations, I would request you to consider extending the time limit for 100 percent excise duty exemption for Uttarakhand and Himachal Pradesh upto March 31, 2013â€.

However Sharma, who was here on Saturday, said, â€œthere would be no extension of the central excise duty exemption beyond March 2010 granted under a special industrial package to Himachal Pradesh and Uttarakhand after the expiry of the sunset clause.

Three other components of the package – income tax holiday and capital and transport subsidies â€“ would continue as per the original time frame in these states,â€ he had stated.

In Himachal, the industrial package has lured investments in the pharmaceutical, food processing, textile, packaging and light engineering sectors in the state.

Official data shows the state had approved 13,195 projects after the package was announced. Of these, 6,356 units with an outlay of Rs.6,523 crore have begun production.

However, Nishank said the industrial package attracted an investment of Rs.30,000 crore. Most of the investments have been made in Haridwar, Uddham Singh Nagar, Dehradun and Nainital.