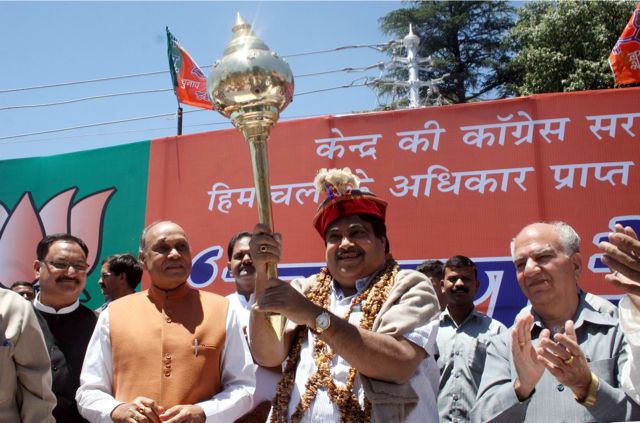 Unsatisfied with the extension of a curtailed industrial package, BJP went ahead and held its Nyaya Rally where chief minister Prem Kumar Dhumal and senior leader Shanta Kumar pointed out at discrimination being meted out to a state ruled by the opposition party.

Addressing the mammoth gathering Dhumal said that diluting the industrial package by withdrawing excise exemptions that was granted by the Vajpayee government in 2003 for a ten year period was dishonoring a commitment. â€œWe will take the matter to court, should the package not be fully restored,â€ he said.

The chief minister disclosed that in his meeting with Prime Minister Manmohan Singh on Saturday, he did let him know about the discrimination meted out by the 13th Finance Commission recommendations which had under assessed the states salary, interests and pension accounts by as much as Rs 1600 crores. â€œWhereas other states had got higher allocation under the recommendations of the commission, Himachal had got the least,â€ he said.

Our adherence to peace is taken as a sign of weakness, said Dhumal adding, that despite the immense contribution of the people from the state made by laying down their lives in defense of the nation, the quota for recruitment in the armed forces was reduced.

With the parliament having legislated over division of assets when the state of Punjab was trifurcated in 1966, Himachal was still to get its due from the power projects under Bhakra Beas Management Board (BBMB). Even after 62 year of Independence, the state was only being served by a railway network that was laid by the British rulers, the chief minister mentioned.

He said that the states ration quota under the public distribution system had been reduced, leaving people to fend off high prices.

The chief minister supported by senior BJP leader Shanta Kumar asked national party president Nitin Gadkari, who was part of the Nayay protest to lead a delegation in support of the states demands.

In his address Shanta Kumar said the party would continue to demand justice for the state. He said that it was the states case in the Supreme Court that has directed the central government on April 29 to intervene and settle outstanding issues with Punjab and Haryana within 3 weeks, otherwise the court would do so.

BJP president Gadkari in his speech endorsed the states stand saying the national party would stand by the state and partial withdrawal of the industrial package was unjustified.