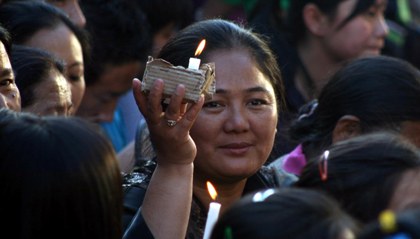 Shimla: Activists of the regional Tibetan youth congress and regional Tibetan women association hold a candle light rally to marks the 21st birth anniversary of Gendun Chokeyi Nyima, the boy recognized by his Holiness Dalai Lama as the 11th Panchen Lama, in Shimla on Sunday.

Ever since his Holiness The Dalai Lama picked out Gendun Chokeyi Nyima as the 11th Panchen Lama, the boy was picked up by the Chinese authorities and has not been seen in public.

However, Tibetan exiles each year celebrate the birth of the Panchen Lama.