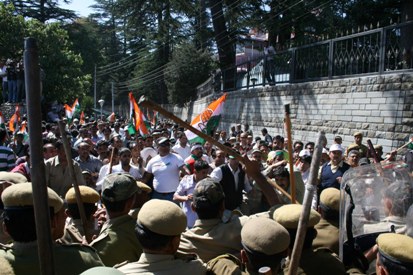 Shimla: Police used force and resorted to a lathi-charge to disperse a congress agitation held today against price rise and increasing of the tax burden on the common man. The protesters retaliated by blockading the main road for over an hour wherein one of them was hit by a passing vehicle.

The agitation took an ugly turn after the congress president Kaul Singh and leader of the opposition Vidya Stokes had addressed a gathering near at Chaura Maidan and led a protest march up to Kennedy Chowk, close to the Vidhan Sabha gates. 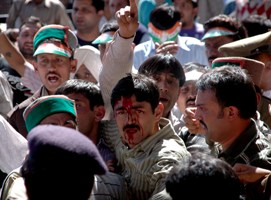 With the leaders be provided a safe passage through a police barricade at the Chowk, hundreds of congressmen stopped by the police continued to raise anti government slogans. An attempt to break the barricade was made, which provoked the police to resort to a mild lathi charge leading to some getting injured.

On retreat, the protesters took a by lane and got onto the main highway leading into the city and forced a traffic blockade.

Manish Thakur, who had sustained head injuries during the confrontation with police earlier, was hit for a second time by a passing vehicle when the forceful blockade was being attempted. This enraged the crowd who stopped the vehicle, broke its windowpanes and then overturned it. 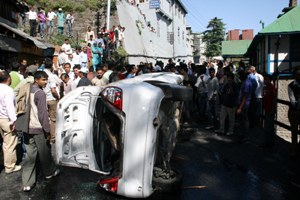 Superintendent police RM Sharma, however, denied that the police had hit anyone. He said that the agitators who were trying to break the barricade at the Chowk for over an hour, in frustration resorted to throwing stones. â€œPolicemen were injured in the stone throwing. Besides, medical opinion has been sought about nature of injury caused one of the protesters (Manish Thakur) as to whether it was by a stick or a stone,â€ said Sharma.

He said 46 persons had been detained under section 107, 151 of IPC and one person under section 353 for causing injury to a policeman by stone throwing.

Speaking to the media, later, Kaul Singh said that the police had used force to disrupt a peaceful agitation.

Earlier in his address to the demonstrators, the congress president said the government was being partial in applying the law against political opponents. â€œFalse cases are being framed up to implicate political adversaries,â€ he said.

By increasing VAT and, imposing entry tax, prices of commodities were bound to rise and by increasing bus fares, users of public transport had been hit hard, he said..

Stokes in her address said that atrocities on women was on the rise as was exemplified by a CBI probe being sought against a senior police officer over charges of allegedly destroying evidence about suicide of a woman lecturer. She said that the states land laws had been diluted for allowing purchase of land by outsiders, something which previous congress governments had legislated against to protect farm lands.