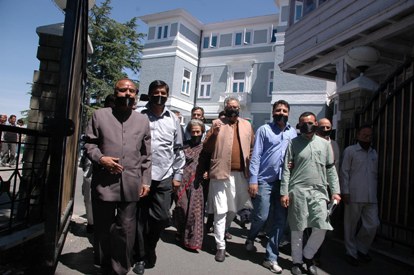 Opposition congress lawmakers in protest walk out of house masked with black bands on their mouths: Picture by Lalit Kumar

Shimla: With the government not relenting to withdraw a case against a MLA for allegedly intimidating an official, opposition congress legislators in a unique protest today first defied the chair in the Vidhan Sabha by wearing black badges and then going silent and not participating in the dayâ€™s proceedings.

It was during question hour, when GS Bali of congress rose to ask a supplementary question that speaker Tulsi Ram noticed all opposition members wearing black badges on their left arm. Saying that it was against the privilege of the house, the speaker asked him and other congressmen to take of the badges.

When the speakers repeated requests had not affect on the opposition, the protesting legislators took of the badges and tied them on their mouths to maintain silence throughout the rest of the dayâ€™s proceedings.

Minister of parliamentary affairs Jagat Prakash Nadda condemned the action of the opposition and said that defying the chair was a matter of breach of privilege against the chair.

Repeated calls from the speaker to the opposition to attend to the questions raised by them, discussion over a special privilege motion and debate over passing of a bill did not provoke them to participate in the days proceedings.

Later, talking to the media in his chamber, speaker Tulsi Ram called it an unfortunate day when the house witnessed a protest by the opposition in defiance of his ruling despite cautioning them about the breach of privilege

If the treasury benches move a privilege motion, action could be taken against all 23 congress legislators, he said.

After the congress protest in the well of the house on Tuesday, a meeting of both sides was called in the speakers chamber in the morning where all agreed to cooperate for holding the question hour, said Tulsi Ram.

The chief minister was even scheduled to respond to the oppositions yesterdayâ€™s protest but it was unfortunate that the opposition did not abide by their word and chose a new way to protest, said the speaker.

Separately, chief minister Prem Kumar Dhumal let the media know that it was sad as no one expected such an old party choose to protest in such a way. â€œThe opposition have every right to protest against the government but it should not defy the rules, traditions and the chair ruling, he said.

Reluctant to back down to the oppositions demand about withdrawing of a case against Subhash Manglet, a legislator from Chopal, Dhumal said that the state government could not force an SDM to withdraw his complaint against the MLA.

The government would follow procedure in moving a privilege motion against the opposition for showing black badges in the house but we are willing to reconsider, should the opposition leader tender an apology to the chair over todayâ€™s protest, he said.

Subhash Manglet told the media, â€œas the ruling benches were bent upon throttling the voice of the opposition, it was better we go silent in our protest as we have been pushed to the wall.â€

He said he would like the chief minister to know that he held no personal grudge against the Chopal SDM but the police had belatedly acted upon his complaint only after he had moved a privilege motion against him in the house.