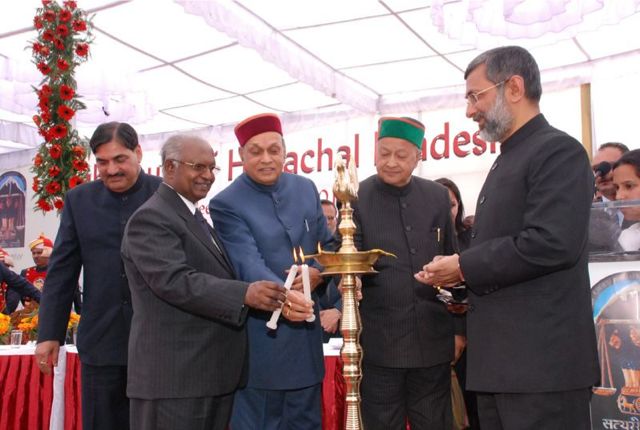 Shimla: Holding a mirror to the higher judiciary, eminent jurist VR Krishna Iyer, a retired Supreme Court judge here stated that long past the colonial era, judiciary had failed in its duty to deliver justice to the common man.

With Chief Justice of India KG Balakrishanan sitting on the dais, the nonagenarian justice Iyer speaking at the inauguration of Ruby Jubilee celebration of Himachal High court here said â€œthere needs to be complete transparency and no secrecy in appointment and promotion of judges and people should be the final authority.â€

He also cautioned that under falling standards of the executive and legislature, role of the judiciary became all the more important. Judicial power was supreme but that put greater responsibility to do justice to the people, he said. He went onto say that dynamic and daring determination was required to reduce pendency of cases in courts.

In his inaugural address justice KG Balakrishanan, Chief Justice of India said that the legal judgments should have a social impact to improve the lot of poor, downtrodden and common man at the grass root level. He asked the judges to take lead in inculcating social values in society by being sensitive to the aspirations and expectations of the people.

Expressing concern about low representation of women in courts, KG Balakrishanan, chief justice of India said that steps were being taken to appoint more and more women judges.

Chief Minister Prem Kumar Dhumal in his presidential address said that the government would consider setting up of Gram Nyayalayas for the speedy justice at the peoples door steps.

The government was committed to provide best infrastructure for the courts and Rs 19 crore had been provided for during the current financial year for construction of buildings. A provision of Rs 20 crore has been made for next financial year, he said.

Union steel minister Virbhadra Singh, who was also present, said that huge backlog of cases pending in the courts was a matter of concern and the delay in justice was causing a sense of frustration among the people.

Justice Kurian Joseph, Chief Justice of the HP, in his address said that 53 thousand cases were pending in Himachal High Court and time bound target had been fixed for their disposal.