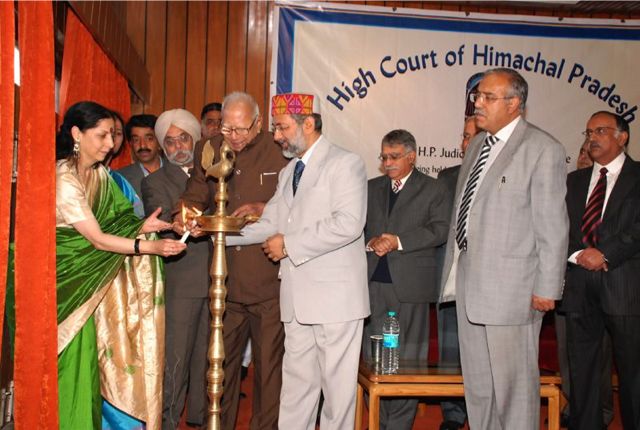 Expressing concern about â€˜the rot of corruptionâ€™ having crept into the judiciary, a doyen of Indian judiciary, VR Krishna Iyer, retired Supreme Court Judge asked judicial officers to find tangible solutions to reduce and wipe out the pending cases in courts and provide speedy justice to the people.

Speaking at the inaugural session of the two days 10th HP Judicial Officers Conference at Himachal Pradesh High Court, Justice Iyer said that huge pendency of civil and criminal cases in the country was a cause of concern for more than 100 crore people. It was the foremost duty of the Bench and the Bar to evolve a system for their time bound disposal.

He said that appointment of more judges cannot solve the problem of clearing arrears and only attitudinal changes could bring about desired results.

Justice Iyer pointed out that poor people cannot reach Supreme Court of India and expect justice from the subordinate courts. The subordinate Judges were required to shoulder the responsibility of wiping out the malaise from the society since they had a better understanding of the problems being face by the people at grassroot level, he said.

People look towards Judiciary with a sense of immense faith because they had little trust in the executive and legislature and the Judiciary was required to come up to their expectations. Speedy disposal of cases was the only answer to restore faith of a common man in our system, he said.

He said that he was shocked to learn that in some lower courts some cases pertaining to the year 1985 were lying pending.

Hholding of Ruby Jubilee Celebrations of Himachal Pradesh High Court would provide an opportunity for the Judges and Bar for introspection and self-assessment, he said

There are 1.60 lac cases pending in various courts of the state, of which 90,000 ousand cases were of criminal nature, which was a cause of concern for a peace loving people, he said.

Justice Joseph said that efforts were afoot to reduce the pendency level of cases to only year. Case arrears of 53 thousand cases in Himachal Pradesh Court would be cleared in a stipulated time frame and the modalities for this were being worked out.

Process of speedy disposal of cases will in no way have any adverse impact on the quality of justice, he added.

In his welcome address SK Chaudhary, Registrar General of Himachal Pradesh High Court said that the two day deliberations would focus on the problems of judiciary besides finding out ways to improve the disposal of arrears. The liquidations of pending cases was the top priority of High Court and sincere efforts had been initiated for this purpose.