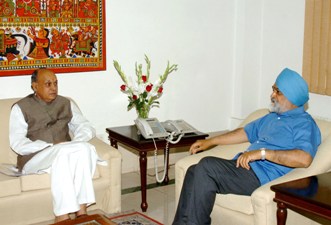 The plan size has been increased by 11 percent over last yearâ€™s plan of Rs 2700, providing additional Rs 300 crore for the new plan.

Dhumal, who had rushed to Delhi after having rescheduled business at the ongoing budget session of the state assembly by postponing the budget presentation from 9th to 12th March said, with an allocation of Rs 1010.79 crore for social services which constitutes 33.69 % of the plan size, the sector has been accorded top priority.

Next priority has been marked for transport and communication which has been allocated Rs 588.93 crore and makes up for 19.63 % of the plan size, he said. This has been followed by energy sector for which Rs 354.37 (11.81%) has been put aside.

Of the total plan, am outlay Rs 1925 was for the general plan. Rs 742 crore for scheduled caste sub-plan, Rs 270 crore for tribal sub-plan and Rs 63 crore for backward area sub-plan.

The chief minister also disclosed that hydropower project with a generation potential of 600 MW are to be commissioned in next financial year.

Speaking about the power sector, Dhumal said that the government had completed allocation of over 95% of its total hydel power potential to various agencies.

The government had decided to provide a loan of rupees Rs 190 crore and an equity contribution of Rs 100 crore to Himachal Pradesh Power Corporations for the execution of 4 projects that are being assisted by Asian Development Bank which include the Sawra Kuddu, Renuka Dam, Integrated Kashang and Sainj projects, he said.

While additional 2600 MW generation capacity is expected to be added during the current 11th Plan, the target for 12th Plan is to harness 7500 MW.

Expressing disappointment with the 13th Finance Commissions recommendations, the chief minister said that it has proved to be highly disfavourable for the state government.

â€œWhereas total devolutions recommended by the 13th Finance Commission to all states in the country over the next five years constitute and increase of 126% over the total transfers recommended by the 12th Finance Commission during the 2005-10 period but in case of Himachal Pradesh the increase in total transfers comes out to just 50 percent, which is lowest increase percentage wise among all states in the country,â€ said Dhumal.