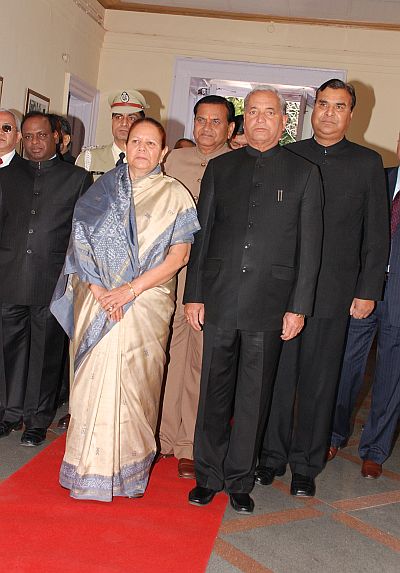 Shimla: Marking the achievements of the BJP governments second year into the term, Governor Urmila Singh in her budget session inaugural address counted increasing road connectivity for villages, scaling up reservation for women in Panchayati Raj Insitutions and putting farm labs to use in conducting soil health conditions as the high points.

At open of the budget session today, the governor in her one and half hour address stated that with road reaching additional 139 villages, of the 3243 panchayats in the state, 2947 stood connected with tarred roads. â€œWork on connecting the remaining 259 panchayats was progressing fast,â€ she said.

Construction of new roads was a priority for the government and after constructing 32 new bridges the states road length stood increased by 611 kilometers during 2009-10, she added.

Amidst thumping of desks by the treasury benches, the governor listed out achievements made in health, education, power, tourism and agriculture sectors.

For achieving better farm productivity, the government was handing out soil health cards after testing soils and 1.25 lakh such cards had been distributed to the farmers in 2009-10.

The state has made tremendous progress in primary education and to increase access for universal access to elementary education a parameter of opening a primary or elementary schools within a distance of 1 to 1.5 km in the hilly areas and 1.5 to 3 km in plain areas had been set out, said the governor.

Towards empowerment of women empowerment, reserved seats in ensuing general elections to the panchayati raj institutions and urban local bodies had been increased from 33 to 50 per cent for women.

To secure working environment for women in offices, women officers have been designated in every department as nodal officers to attend to their problems and required action would be ensured in a time bound manner.

In the health arena, the state government has approved to set up an emergency medical response system by providing 100 well equipped ambulances for referral transport and emergency cases in the state.

Rashtriya Swasthya Bima Yojana was implemented in two districts under which 80, 242 smart cards for BPL families were issued, she added.

In power sector, out of a total hydel power potential of 23,000 MW, 6480 MW has already been harnessed by involving the agencies in central, state, joint and private sector.

Recognising that tourism is a powerful and beneficial agent of social and economic change which generates employment and investment, the HP government has been able to get financial assistance under various circuits and destinations to the tune of Rs 296 crore from central government during the financial year 2009-10, the governor stated.