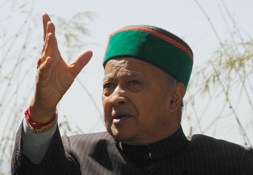 Shimla: Union minister Virbhadra Singh came down heavily on the state government here today saying that while law and order conditions were being allowed to deteriorate, police forces were being used to suppress political opponents, effectively turning governance into a police state.

Talking to the media at his residence here the minister mentioned incidents about CPI(M) workers who were protesting against stiff increase in bus fares being lathi charged at Rampur last Thursday and beating up NSUI president at Dharamshala recently who was only going to submit a memorandum to the deputy commissioner about high prices of food items.

Virbhadra said that space was dissent was being brutally suppressed and political opponents were being treated as political enemies. Clashes being reported were not between one section of people and another but the between the people and the police.

Police was being used to fulfill the political agenda which was nothing but â€˜police rajâ€™ he said.

Speaking about the double standards being adopted for the two sets of CDâ€™s that have rocked state politics in recent years. â€˜The government and its investigating agencies are applying double standards over a CD, in which I and my wife Pratibha Singh figure and another yardstick in which chief minister Dhumal and vigilance chief DS Manhas are caught up, he said.

Alluding to a report by a forensic lab from Gujarat that chief minister Dhumal referred to in the assembly holding out that the two voice CDs in which he figured were doctored, Virbhadra demanded that the whole forensic report be tabled in the house.

He said that since vigilance chief DS Manhas name figured in the CDs, he should be divested of the responsibility of investigating the CD cases. â€œIf the Dhumal CDs were to have been sent to a state forensic lab for verification that could have been done at a lesser cost by sending to the state owned Junga lab instead of Ghandinagar in Gujarat, said Virbhadra.

Commenting on the third budget presented by chief minister Dhumal on Friday, he said, â€œstate finances were in shambles as 23 percent of an outlay in a Rs 15078 crore budget was to be financed through borrowings.â€

â€œUnder such conditions the chief minister would have very little maneuverability in meeting the targets to be achieved in the year.â€

On increasing bus fares, the five time former chief minister asked the government to review its decision about increasing bus fares for a second time by as much as 30 percent. â€œIn two years, the BJP government has raised bus fares by as much as 45 percent,â€ he said. This is much too heavy a burden on the people of a state that is totally dependent upon road transport and the government needs to review its decision, he added.

About the states recruitment policy, Virbhadra said that contractual jobs had become the norm of this government and there was no hope of permanent jobs even after qualifying state public service commission or subordinate service selection board examinations.

He held that education standards in schools as well as university had fallen and the government was mute about it. Commenting upon the budget announcement of doing away with class 8 board examinations, the union minister said that whether you conduct an internal or external examination, the need is to bring about qualitative improvement in educational standards.

Citing an example of Senior Secondary School, Saharan, he said that education minister ID Dhiman had served as a headmaster in that school but for the last two years he has been unable to post teachers for physics, chemistry and biology there and now there are plans to do away with science subjects in the institute itself.

Falling education standards had led to downgrading of Himachal Pradesh University. Itâ€™s not without reason that HPU has been downgraded because changes were made in the recruitment policy that has helped people with lower merit but belonging to a particular ideology getting selected, he said.