Shimla: The countries decadal census operation, perhaps the largest exercise of such a kind in the world that is being launched in Himachal Pradesh from 7th April, C Chandramouli – the registrar general and commissioner census operation of India disclosed here today. 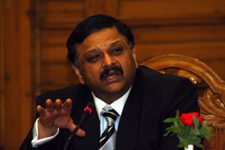 Talking to the media the commissioner census said, “in Himachal, the first phase of the census operation would begin on April 7, 2010 and would be completed in 45 days by May 22, 2010, said .

In all 15,429 enumerators would be deployed from different departments to undertake the exercise. These enumerators would be imparted training by 338 master trainers to accomplish the task, he said. The National Census Register was an important document to be prepared during the Census Operation, he added.

After holding a meeting with the state government and senior officials said that during the census operation people would also be issued identity cards for which offices at panchayat level funded by centre would be opened in the states to ensure that every individual was in possession of census cards.

â€œIt would be for the first time that the entire exercise would be computerized and translated into different languages. The country wide census operation would cost about Rs 6000 crores and the data collected would be compiled in 18 languages, he said.

Earlier during a meeting with the state government, chief minister Prem Kumar Dhumal over a video conference with enumerator officers of all districts said that the Census Operations-2011 was a democratic exercise that had a bearing upon all policy decisions taken over the next ten years.

Dhumal said that data collected during census formed the base for allotment of funds to the States by the Centre for various development and welfare schemes during Five Year and Annual Plans for the states.

He said that the census data of immensely important to depict the economic and social status of any nation which also indicates various shortcomings at different level in achieving the objectives.

The chief minister asked enumerators to reach every individual and household for gathering the required data.

Since the first census recorded in 1872, the operation has grown in size and would be the world biggest such exercise in 2011 to record data of over 100 crore people and also provide them with identity cards.

In all there have been 15 census operations in the country, with the 2011 one being the 7th one after the nation attained independence in 1947.