Shimla:Leaders of the two communities in Nerwa, where communal tension had flared up on Friday, on persuasion from the district administration sat together and decided to bury the hatchet on Sunday.

District magistrate JS Rana, who had been camping in Nerwa since Friday said, â€œefforts to bring about communal harmony did result in getting members of both communities to sit together today.â€ 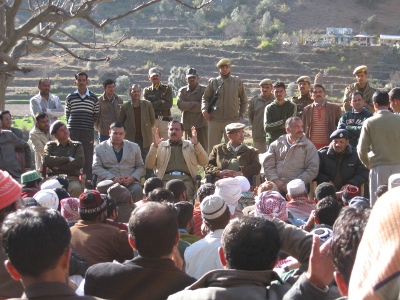 â€˜Differences were resolved as leaders from both communities decided to not do anything that would be provocative and disturb peace,â€ said Rana.

As normalcy returns to Nerwa, which is close bordering state of Uttrakhand, the district administration decided to partially withdraw the heavy police that had been deployed in the area.

â€œA small but strong enough police force is being kept in place to maintain law and order as well as protect life and property of all residentsâ€, said RM Sharma, district police chief who is also camping in the area.

Communal tensions had led to burning down, a religious structure of the minority community, ransacking of three shops and burning of a motorcycle in Nerwa market on Friday by an irate mob.

The mob of about a 1000 people after protesting over an incident of cow slaughter had turned their ire on the resident minority community, who have been living in and around Nerwa for decades and own orchard lands.

The communal flare up is a rare incident in Himachal Pradesh, where the Muslim minority recorded in the 2001 census was only 119,512 and constituted just 1.97 % of the states population.