Shimla: Not satisfied with government water supply systems, select rural hills communities successfully demonstrated that alternatively self managed schemes not only helped in overcoming shortages but the water quality also improved leading to a decline in water borne diseases.

Nirmala Devi a water supply committee member from Salari village in Kangra says, â€œwater used to be a daily struggle for us till we decided to take things into our own hands and build, operate and manage our own supply line. The days of erratic government water supply are over and now besides meeting drinking needs, we are able to even irrigate small patches.

Faced with ever increasing demand for meeting water requirements of 90 % percent of the stateâ€™s population that lives in rural areas, the department of irrigation and public health (IPH) mandated with making water available for all by 2012 are collaborating with German Technical Cooperation (GTZ) to empower panchayats for operating and managing their water supply schemes. 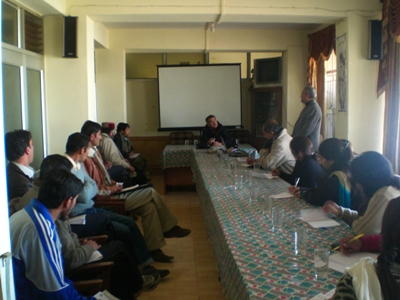 Speaking about the self reliant schemes, Farhad Vania, program specialist for the Indo-German Bilateral project said, â€œIn 9 villages spread over Mandi, Kangra and Shimla districts, the GTZ project Water Availability Self Help (WASH) has shown that given a chance rural communities are capable of managing their water needs.

â€œFrom the water source to distribution, charges and bill collection for beneficiary resident, these schemes have been executed on community participation basis and meet the water needs of all at a affordable price,â€ says Aanandii Mehra, WASH advisor.

Worried over the shortfall in winter rain but encouraged by the pilot project, Narinder Chauhan, principal secretary IPH said, â€œthe department intends to extend the program to two whole blocks – Narkanda and Lambagaon, and also try it out in urban area of Palampur.â€

Besides that the government is also seeking a collaboration with Rattan Tata Trust to expand such an initiative into Bilaspur and Sirmaur district, said Chauhan.

For meeting the water needs of the people IPH department operates 7506 rural schemes and additionally supplies to 49 urban bodies, including Shimla and Solan. For billing water usage, whereas 1238 rural schemes have been handed over to local panchyat bodies, only 3 municipal bodies are doing it.

While acknowledging the panchayat â€“ government collaboration under WASH, Satish, an NGO activist with Sahyog who have helped villages to become self reliant says, â€œthe sense of owning the water scheme and operating it by themselves these villages have gained confidence to take up larger projects of rain harvesting and equitable metered distribution for irrigation purposes even.â€

Mohammad Tufail from Polia village in Shimla district described the process by which the village community was able to overcome the initial hitch for making the residents contribute towards the construction of the new water supply scheme.

Lokendra Chandel chairman of the water management committee for village Tatal in Kiartu panchayat in Shimla district spoke about the health benefits the village had observed as the committee kept a regular watch on the quality of water distributed.

â€œThe water testing equipment that we own helps us to monitor the water quality being supplied. Now fewer people are falling ill because of water borne diseases, said Chandel.

Om Prakash of Garli village in Kangra mentioned that self reliance in managing their village water supply had encouraged the villagers to start repairing a century old tank structure for storing additional water.

Not only having successfully executed and managed these schemes, says Farhad Vania, the village water management committees have generated surplus funds from the user charges levied, which has emboldened them to take up larger issue related to water management and sanitation.