Shimla: Governor Urmila Singh made a surprise visit to call the inmates of Adivasi Balika Chhatravas, Salogra near Solan on Friday, where she interacted with the five tribal girls from Jharkhand living in the hostel. 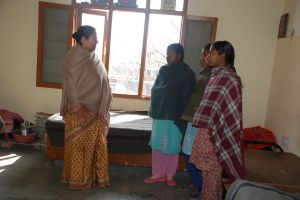 Following breakout of the scandal about alleged molestation of the girl students by the hostel warden, other girls living in the hostel have left for their homes due to winter vacations in the Senior Secondary School, Salogra, which they attended.

Acting upon a complaint about molestation of minor girls at the hostel brought to light by social activist Ajai Srivastava, the police on Wednesday had arrested Pawan Goel, the hostel warden.