Shimla: A love tale gone horribly wrong ended in gory murder for the bright and budding IIT textile engineer girl student while her lover was tracked down in a train faces murder charges.

Superintendent police RM Sharma, giving details about the murder said, â€œGaruv Verma, a 22 year old 3rd year student at IIT Rorkee who the police was looking out for the murder of fellow IIT student Pragati that took place in a hotel room here has been arrested.â€ 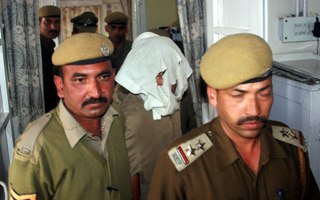 After examining the clues at the murder site, which included a birthday cake, a knife, a whiskey and beer bottles, a laptop and having registered under his true identity, the police have booked Garuv under 302 IPC for murder,â€ he said.

Sharma added that after questioning the suspect and taking other clues into account, it did not appear to be a premeditated murder. The suspect belongs to Gonda in Uttar Pradesh, while the girl is from Patna, Bihar.

He said that according to the murder suspects statement, he and the victim knew each other over three years, from the time they were together at a coaching centre in Kota before qualifying the IIT entrance examination.

The immediate provocation for the murder act appeared to be an element of suspicion in the relationship, said Sharma, for Garuv revealed that the victim had told him about having had affairs earlier before she got into a relationship with him.

To celebrate Garuvâ€™s belated birthday (which was on 25th December), the duo set out by car from Delhi on 25th February as there was a holiday break. They checked into hotel Rasik here at about 3 a.m. on Friday morning after having bought a cake, a knife, beer and whiskey at Ambala on the way. While Garuv checked in with his name, the girl is said to have registered herself as Stuti.

The SP said that after taking drinks and celebrating the occasion by making love, Garuv says that he hit Pragati with an empty beer bottle at about 1 p.m. while she was sleeping. Later he tried to strangulate her and cut her throat and wrists, said Sharma.

The suspect stayed in the room till about 2.30 a.m. Saturday before taking a taxi to Chandigarh. Grauv claims to have attempted suicide after committing the murder. The hotel staff after finding the room looked discovered the nude body of the victim on Saturday morning by opening the room with a duplicate key.

From Chandigarh the suspect on Saturday itself took a taxi to Rorkhee and later boarded an evening train from Haridwar and was headed to Bhatinda. Meanwhile the police had gathered information about the suspectsâ€™ movements from Rorkhee, where he was spotted, and were able to track him down on the train at 12.30 a.m. â€œWithin 10 hours of the murder discovery, we asked the railway police at Jagadhiri to make the arrest for us,â€™ said Sharma. The body of the victim after conducting a postmortem has been handed over to the girlsâ€™ relatives, he added.

While the police is awaiting the postmortem report to know whether the girl died because of the knife wounds or because of strangulation, sources in IGMC medical college where the postmortem was conducted say the death was caused by excessive bleeding. Relatives of the girl who had come from Patna to collect the body, which included an uncle – Vipin Tebrewal, refused to talk to the media.