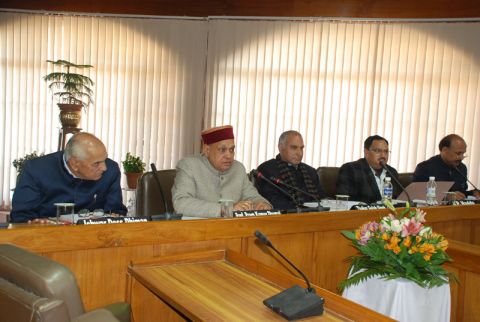 Shimla, Having held discussion with all state lawmakers, chief minister Prem Kumar Dhumal today laid out a target of achieving over 7 percent growth in 2010-11 before giving final touches to a Rs 3000 Cr proposed annual plan for the next financial year.

The proposed plan, which is Rs 300 crore more than the current Rs 2700 crore plan would now be sent to the Planning Commission for final approval, said an official spokesman.

Giving high priority to social services, the new plan proposes an allocation of Rs 1010.79 crore for the sector, which include education, technical education, health, housing, urban development and social welfare, he said.

Creating basic infrastructure for facilitating education had been accorded priority in the last three years of 11th Five Years Plan period and would continue for the next two years so as to make the state education hub, chief minister Dhumal said.

With a target of constructing 680 kms of road and 30 bridges in the new plan, funds amounting to Rs 588.93 crore have been marked for transportation and communication sector.

Of the Rs 342.84 proposed for agriculture and allied activities, Rs 310 are alone intended to be spent on flood control. For the energy sector, a provision of Rs 354.37 crore has been made.

To implement plan targets, chief secretary Asha Swaroop said that secretaries would carry out quarterly review of all developmental schemes. The government was also exploring possibilities of delegating more power to field functionaries for speeding up execution of development projects, she said.